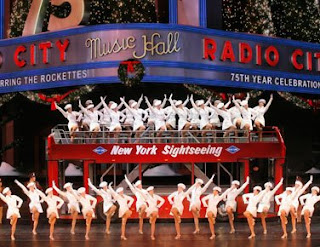 I took a tour of Radio City Music Hall last year but unfortunately, because there was a show going on, my group wasn't able to go into the auditorium. We could only gaze down from an observation window on the massive stage designed to resemble a setting sun.
So I was pretty excited when I realized that my New York City visit last month coincided with the annual Radio City Christmas Spectacular. Although my schedule was packed with musicals, plays and opera, as well as get-togethers with friends and sightseeing, I really wanted to sit inside that Art Deco landmark and watch those leggy and legendary high-kicking Rockettes.

On a Thursday morning with ominous clouds in the sky and rain in the forecast I thought, this is the time. I raced over to the box office with minutes to spare before the 10 a.m. show, plunked down my credit card and asked for the best available seat. (Be honest, haven't you always wanted to do that?)

Radio City Music Hall opened in 1932 and the Christmas Spectacular was first presented a year later. The auditorium, with seating for nearly 6,000 people, is huge. It was pretty exciting to be in the place where they hold the Tony Awards each year. And watching on television, you don't get a sense of just how big it is.

The 90-minute show, conceived, directed and choreographed by Linda Haberman, is divided into 12 scenes, with about half featuring the Rockettes and all of them designed to get you firmly in the Christmas spirit.

And I enjoyed it all - the Rockettes dancing their way through "The Twelve Days of Christmas," the Nutcracker, the living Nativity with an actual camel and sheep on stage. It's the Christmas Spectacular, after all, and it's fitting that there's a message about the meaning of the holiday.

I was really looking forward to the Parade of the Wooden Soldiers, one of the original numbers. And it was amazing to watch a line of dancers, dressed as toy soldiers in costumes originally designed by Vincente Minnelli, very slowly fall back on each other with incredible precision.

One of my favorite scenes involved the Rockettes traveling around Manhattan on a double decker tour bus, passing through places like Central Park and Times Square, and singing "New York at Christmas." And I don't recall them getting stuck in traffic!

The Christmas Spectacular has added modern touches, too, including a very cool 3-D animated film, Santa Lights Up New York, by Synthespian Studios. With my 3-D glasses on, I watched Santa take a thrilling ride from the North Pole to New York City, then through the doors of the Music Hall. I felt like those reindeer were coming right at me!

The only thing that surprised me was, people were taking pictures throughout the show. I thought maybe I missed the announcement that photography was permitted. But it clearly states on the Web site that you must refrain from taking pictures and the policy will be strictly enforced. Well, it wasn't being enforced at all as far as I could see.

Radio City Music Hall is such a grand, historic place and the Rockettes are terrific. I can't believe that it was on the verge of being torn down in the 1970s. Fortunately, the theatre was granted landmark status in 1978, ensuring its preservation. And it underwent a complete renovation in 1999, at a cost of more than $70 million. Even if you can't make the show, consider taking the tour.

Seeing the Christmas Spectacular with the Rockettes is one of those iconic New York City experiences - and you don't need to sit in the most expensive seats to have a great time. It's a fun, warmhearted show with some truly spectacular moments.

The Radio City Christmas Spectacular runs through Dec. 30 in New York City and there's also a national tour.
Posted by Esther at 1:07 AM

I've never been inside and always mean to take the tour if not an event taking place there when I visit. The show sounds like fun and they tour it as well. I'd rather see it there though. And yes, no pictures please!

I agree, there's something special about seeing it at Radio City. And the tour is really interesting. Plus, you get to meet a real life Rockette! It's best to go when there's no show so you can actually go inside the auditorium itself.

this event is very beautiful and i am waiting for this

Hey cheap wicked S.F., thanks for the comment! I agree, the Christmas Spectacular is beautiful and the Rockettes are fun to watch. Hope you enjoy it!