Finally, a role of her own

I so was thrilled when I read this sentence in Ben Brantley's New York Times review of the musical Fela!, which opened on Broadway last night: 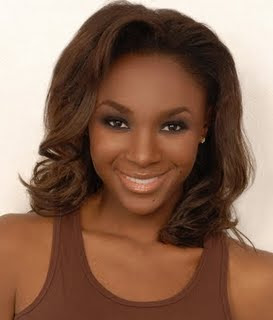 "Saycon Sengbloh shimmers as the seductress who introduces Fela to Marx and the American black-power movement."

Now that I've been going to Broadway shows for a few years, it's great to see actors and actresses whose performances I loved work their way up the food chain.

I can remember as clearly as if it happened yesterday walking up to the Broadway Theatre with Steve on Broadway on the day we finally met after months of e-mailing. It was July 22, 2007, and we going to see The Color Purple with Fantasia, who'd gotten great reviews.

Unfortunately, Fantasia was out that day. I was a bit disappointed until Steve found out that Saycon Sengbloh would be playing the role of Celie. He told me he'd seen her in Wicked and she was terrific.

Well, Steve was right. I was so moved by her performance in The Color Purple. In May, I saw Sengbloh in Hair. And next month, I'll be in the audience at Fela!

(In this New York Daily News story, she talks about how she's known her Fela! costar Sahr Ngaujah since they were teenagers in Atlanta.)

Until now Sengbloh, who made her Broadway debut in Aida in 2003, has never done what I imagine every Broadway performer dreams of doing - create a role.

Congratulations, Saycon. As Celie would say, you are definitely here.
Posted by Esther at 9:30 AM

Saycon Sengbloh should be a major star and thankfully, her turn in Fela! should get her some well-deserved attention.

I remember the first time that little slip of paper fell out of my Playbill indicating that said a standby would be on in Wicked for Elphaba. I had never heard of Saycon Sengloh before, but as she made Elphaba her own, I was determined never to forget her name.

It's because I remembered her name so well that I didn't think all was lost when we went to see The Color Purple and Fantasia was out. Seeing Saycon's name up on that little board in the lobby of the theatre reassured me that we might be in for a rare treat. While scores of disappointed Fantasia fans demanded refunds, we stayed and Sengbloh didn't disappoint.

Third time, of course, was a charm as Sengbloh appeared as part of the regular cast for the current revival of Hair. But even during my performance, her ante was upped as she also portrayed Dionne.

So I'm very happy to see Saycon now in a featured role in Fela!. I loved her for a fourth time and can't wait to see what she does next.

Thanks for the comment, SOB. I'm so glad you remembered her name! And I wish more of those Fantasia fans had stayed. Sometimes you take a chance with an understudy and it's so rewarding.

I thought Saycon's transformation as Celie was so powerful - from this really brutalized child to a confident, successful woman. The way she learns to love herself along the way was so moving.

I just feel so happy for her, knowing how long she's been on Broadway as a replacement or understudy and knowing what the odds are for any actress, but especially for an African-American actress. Now, she finally has a chance to create a role!

Sometimes it's the circumstances that make a show special. Best of all was sitting right next to you. Finally meeting you in person and seeing Saycon in The Color Purple will be forever linked in my mind. At the end of the day, I had a dear friend and a brother.

I'm glad you're such a big Saycon Sengbloh fan. Even though she had a fairly small part in Hair, she really made it her own, and I was happy to see her again in Fela!, though I thought she was underused.

Hey Linda, thanks for the comment! I actually got to see Saycon play a little bigger role in Hair because she went on as Dionne for that performance and got to open the show with Aquarius!

Yeah, I guess Fela! is pretty much all Fela all the time. I'm looking forward to seeing it in a couple of weeks. I know Saycon's part is small but at least she's getting noticed. She got a nice mention in the Times and couple of other places that I saw.