Other Desert Cities, at Broadway's Booth Theatre
Gratuitous Violins rating: ***1/2 out of ****

I've been hooked on a few nighttime soap operas over the years, most notably Dallas and Falcon Crest. But there hasn't been one recently that captured my interest until Brothers & Sisters, which ABC canceled in May after a five-year run.

So a big part of my excitement about Other Desert Cities stemmed from knowing that it was written by Jon Robin Baitz, the creator of Brothers & Sisters, and included a cast member from the series, Rachel Griffiths.

In some ways, Other Desert Cities felt like a very special episode of Brothers & Sisters: it revolves around the problems of a wealthy and prominent family. All the nighttime soap ingredients are present - drug addiction, depression, alcoholism. Family secrets are about to be revealed and a long-buried scandal unearthed. There's a black sheep, too. 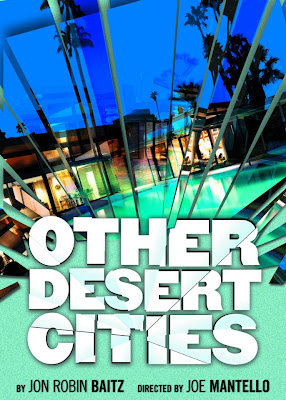 Now, I don't mean any of that as a knock. Popular fiction is tough to get right and I'd rather read John Grisham than John Updike. And I liked Other Desert Cities a lot. It's a highly polished work with terrific performances. Baitz has a good ear for dialogue. The direction by Joe Mantello makes the action clean and clear. But it seemed like something I'd seen before.

Heading the family are Stacy Keach and Stockard Channing as Lyman and Polly Wyeth. He's a former actor turned Republican Party official and ambassador. She's a former screenwriter. They travel in the same circles as the Reagans. (When the scandal broke, Polly mustered all of her strength to get back in the good social graces of Ron and Nancy.)

When the play opens, it's Christmas 2004 and the family has gathered at the Wyeths' home in Palm Springs. John Lee Beatty has designed a living room that looks beautiful in a rustic kind of way, with a huge stone wall, but not especially comfortable.

The source of tension is Brooke's plan to publish a tell-all memoir which, needless to say, is upsetting to her family.

I've loved Griffiths from TV and movies and she's riveting onstage as well, playing a vulnerable woman suffering from depression who's about to let out all of this smoldering anger toward her parents. A novelist with one successful book, the memoir has enabled her to break through her writer's block. She feels compelled to publish it, no matter how much pain it causes.

As her brother Trip, a producer of highly successful reality-TV shows, Thomas Sadoski is more easygoing. Much younger, he doesn't share her intense anger. Baitz makes an interesting point here, how siblings can have widely divergent memories of their childhood and how parents can change over time so that maybe they were raised differently.

Channing and Judith Light as two very different sisters are a joy to watch as well. Polly is the picture of composure while Light's Silda is messy, an acerbic alcoholic. They're Jewish but Polly seemed pretty WASPY. Silda explains this with one of the play's best lines: "We're Jewish girls who lost our accents along the way but that wasn't enough for you, you had to become a goy."

While I liked the way Baitz explored the family dynamic, his attempt at getting political struck me as more cliched. Keach's Lyman fulminates against the generation that ruined this country with their drugs, free sex and radical politics. Brooke and Silda rail against the intolerance of conservative Republicans.

What stood out for me was the way Other Desert Cities explores the heart of this fractious family. Polly and Lyman don't share Brooke's view that her memoir will be cathartic. It forces them to come clean about secrets that they've been keeping for a very long time. (To be honest, the plot twist wasn't very original.)

Baitz gives them both powerful, emotional speeches. For all the coldness and harshness with which Brooke tries to portray them, Lyman and Polly Wyeth are caring people. The play is a testament to a parent's love for their child - no matter what. It's also a testament to what very rich and powerful people are able to do for their children.

Baitz left Brothers & Sisters after a year due to disagreements with the network over the show's direction. At the time, he decried "the demographic demands that have turned America into an ageist and youth-obsessed nation drives the storylines younger and younger, whiter and whiter, and with less and less reflection of the real America.

I'll give Baitz credit for including older characters in Other Desert Cities but he's written a play pretty similar to what he's criticized the networks for doing. It's as white as can be and not exactly reflective of the "real America."

Still, it was tremendously entertaining to see a juicy family drama onstage just like the ones that I've loved in novels and on TV. And it's always comforting to be reminded that rich people have problems, too.
Posted by Esther at 1:15 PM