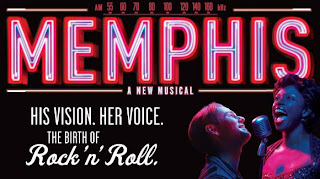 Really, Memphis has everything I love in a Broadway musical: choreography that's exciting to watch, songs that move me, memorable characters who truly command the stage and an absorbing story.

Like several other shows opening this fall, Memphis explores race in America. Set in the late 1950s and early 1960s, the musical tells a story from the dawn of rock 'n' roll: a white disc jockey falls in love with a black singer whom he's determined to make into a star.

The show opens in a smoky basement nightclub whose black patrons are shocked when a white man named Huey Calhoun comes down the stairs and into the club.

Chad Kimball is superb as Huey, a likable, irrepressible high school dropout who's passionate about rhythm and blues and has some crazy ideas about bringing the music to white audiences. His signature phrase is "Hockadoo!" - which is never quite explained. No matter!

And Montego Glover is equally terrific as Felicia Farrell, a beautiful and talented black singer who wins his heart. At first I wondered if they were too different personality-wise to fall in love but Glover's Felicia is a strong, patient woman, the clear-headed counterpart to the sometimes stubborn Huey.

The costume design by Paul Tazewell brilliantly illustrates the difference between these two people - Huey's mismatched shirts and pants are quite a contrast to Felicia's gorgeous pastel dresses, with shoes that match perfectly.

I also liked J. Bernard Calloway as Felicia's protective brother Delray, who owns the nightclub, Cass Morgan as Huey's Mama, a timid woman who doesn't approve of her son's relationship with Felicia and the sweet, funny James Monroe Iglehart as Bobby, the janitor at the radio station where Huey gets a job.

The songs from composers David Bryan (of Bon Jovi) and Joe DiPetro give both Glover and Kimball moments in the spotlight. Glover is a small person but wow does she have a big, powerful voice in her solo "Colored Woman." Kimball's "Memphis Lives in Me" is a stunning Act II song that should have ended the show.

The ensemble numbers, especially the opener "Underground" and "Everybody Wants to Be Black on a Saturday Night," provide a great showcase for Sergio Trujillo's exhilarating choreography. And director Christopher Ashley keeps things moving along nicely.

As much as it horrified their parents, you can understand the appeal of the music to white teenagers - it definitely makes you want to get up and move.

DePetro, who wrote the book, doesn't shy away from depicting the obstacles that Huey and Felicia face as an interracial couple in 1950s Memphis.

I saw the musical a night after the New York Senate defeated a bill to legalize same-sex marriage and I couldn't help but note the parallels - two people forced to hide their love, who face violence from bigots opposed to their relationship, who can't get married in their home state.

Unfortunately, Memphis loses something in Act II as Huey climbs from radio dj to host of an all-black TV dance show and Felicia's career shows signs of taking off. (Although the projections by David Gallo and Shawn Sagady that illustrate Huey's rise are very effective.)

The musical spends a bit too much time on the TV show and Huey does some things that seem unbelievable. (Although he has a drinking problem so that may explain it.) Plus, DePetro has tacked on a Hollywood-style ending that while fun, robs Memphis of some of its power.

I know some reviewers have compared Memphis to Hairspray for its story about music crossing the color line and Dreamgirls for charting the rise of a black singer. But I thought of another musical it resembles - Gypsy.

Huey has some of Mama Rose's self-destructive tendencies. And Felicia, as much as she loves Huey, has to be her own woman, just as Louise had break free of her mother.

In the end, this is such an entertaining musical with amazing performances from Kimball and Glover. They make Huey and Felicia unforgettable and make Memphis a musical that's definitely worth seeing.
Posted by Esther at 11:00 PM

Great review -- I really wish I could see this one!

Thanks, Bob! Despite the problems with the second act and the ending there's still so much worth seeing in Memphis, especially Chad Kimball and Montego Glover. I don't know what it is about endings - I've read a lot of novels with the same problem. Hard to wrap things up, I guess.