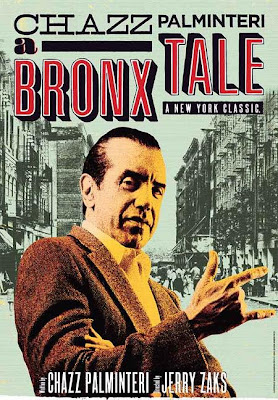 I knew Chazz Palminteri was a terrific actor and as A Bronx Tale proves, he's no slouch as a playwright either.

In his solo show about growing up in New York City in the 1960s, which I saw last weekend at the Providence Performing Arts Center, Palminteri portrays 18 characters. He brings to life in vivid detail an assortment of mobsters, his bus driver father and two versions of himself - an impressionable 9 year old and a streetwise 17 year old.

The set design by James Noone is very simple - a street sign on a tall pole announcing the location, 187th Street and Belmont Avenue in the Bronx, the concrete stoop outside Palminteri's apartment building and a neon sign lighting up the local bar, Chez Joey.

As the story opens, young Calogero (Palminteri's given name) witnesses an act of violence that leads the neighborhood mob boss, Sonny, to take him under his wing. He gives him the nickname "C" and an assortment of odd jobs.

This new relationship doesn't sit well with C's father, Lorenzo, an honest, hard-working man who doesn't want Sonny to have anything to do with the boy.

But the young Palminteri is clearly in awe of Sonny and enthralled with the colorful bunch of wiseguys who surround him, men with names like "Frankie Coffee Cake" "Eddie Mush" and "Jojo the Whale."

Palminteri does a masterful job portraying all of these characters and their various idiosyncrasies with a change in his tone of voice, an expression, the way he moves on stage. He makes them all distinct and memorable and he's a wonderful storyteller.

There's a lot of humor in A Bronx Tale, including a very funny segment where Sonny tries to teach the teenage "C" a thing or two about women. But Palminteri doesn't romanticize the mob. And when C falls for a black girl, he doesn't gloss over the neighborhood's racism either.

Palminteri has been doing this show for a long time. It premiered in Los Angeles in 1990, then moved off-Broadway. In 1993, it was made into a movie with Robert DeNiro. In 2007, Palminteri did it on Broadway and for the past year he's been on a national tour.

But despite having performed it for 20 years, Palminteri isn't simply going through the motions. He makes A Bronx Tale captivating. And even though the events belong to his childhood, the now 57-year-old makes them seem as fresh as if they had happened just yesterday.
Posted by Esther at 4:00 PM

Ever since I learned that A Bronx Tale was coming to Providence I have been so exited about seeing it. I saw it last night at PPAC and was not disappointed.

That Chazz could go for 90 minutes like that was unbelievable. And to be able to do that night after night (twice on Sat & Sun) and make each performance seem like the first time is the mark of an incredible entertainer.

But I have to say, half of the entertainment last night in Providence was in watching the audience!

Thanks for the comment Sandy. I definitely agree - what a masterful acting job. It's Palminteri onstage alone for 90 minutes and it's pretty incredible the way he weaves all of these characters into a totally absorbing story without taking a breather.

Btw, I was there Sunday afternoon and I was a little disappointed at the relatively sparse crowd. I think the orchestra section was about two-thirds full, if that. It's so rare that a play tours at all and to get the same show you could have seen on Broadway a couple years ago, for $55, is such an incredible deal. Too bad more people didn't take advantage of it.

Great review, Esther. I was at the show with Sandy on Sunday night and the theater was packed. Too bad Sunday afternoon was so poorly attended. As Sandy said, with a large Italian population in RI, the audience was definitely part of the entertainment. But the gum smacking, loud and obnoxious woman sitting behind me was more than a little annoying. (And full disclosure, I'm part Italian, so I don't mean no disrespect.) ;)

Thanks, Pam. Glad the theatre was packed on Sunday evening. Luckily, I did not have any problems with disrespectful theatregoers this time! (Although I have in the past.) I also noticed a few children were brought by their parents. They looked to be about 10 or 12. At first I thought that was kind of young but you know, it's a lot tamer than what they'd see at a PG-13 movie. And what a chance to see a great actor ply his craft. Hopefully it's an afternoon they'll remember.