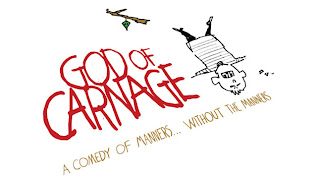 Seeing God of Carnage reminded me of the narrator's line at the beginning of the MTV series The Real World: "Find out what happens when people stop being polite and start getting real."

The four of them have come together because Alan and Annette's son has hit Michael and Veronica's son in the mouth with a stick, breaking two of his teeth. (I think both kids are around 11.) Michael and Alan have a much more "boys will be boys" attitude while Veronica and Annette find it much more upsetting.

Alan is a high-powered lawyer annoyed at being taken away from work; Annette, a wealth manager, is kind of meek and very apologetic. Veronica, a writer, is justifiably angry; and Michael, an importer, is low key and seems a little embarrassed by the fuss his wife is making.

As you can probably guess, things don't stay polite for very long. The characters undergo some surprising personality changes and by the end, it's the adults who need a timeout. I don't think it's a coincidence that set designer Mark Thompson has painted the walls of the Jacobs Theatre stage a fire-engine red. No warm, soothing tones here.

What I found so enthralling to watch is the way events unfold, which I think is a testament to the skill of director Matthew Warchus and this terrific ensemble cast. (Yasmina Reza's 90-minute play has been translated from the original French by Christopher Hampton.)

There's a lot of physical and verbal sparring and it would be easy to let things get out of control. But the actors make such a seamless transition from civility to acrimony that by the end, I couldn't quite remember when things began to go wrong. It all just seemed so inevitable.

And it was so great to see four actors I've loved from movies and television tackle meaty roles onstage, making them so memorable in the process. Harden's meltdown is especially amazing to watch.

It's not terribly difficult to make me cry but making me laugh is another matter. God of Carnage, which had a 2008 run in London with a different cast, is hysterical. At one point, Davis' Annette erupts in a way that you wouldn't think would be funny but all four actors working in concert make it one of the most hilarious moments I've seen on stage.

I'm a big fan of The Soporanos, so I was especially thrilled to see Gandolfini. A few moments, like when he's talking on the phone to his mother, gave me some "Tony" flashbacks. But Michael is a much quieter, less thuggish character and Gandolfini mostly made me forget his larger-than-life tv role.

And Daniels, whom I've loved since Terms of Endearment and The Purple Rose of Cairo - what a treat. He has wonderful body language and facial expressions that show you just how impatient and annoyed he is at having to be at this get-together.

There were parts of Reza's play that didn't work quite as well for me. The subplot involving one of Alan's clients seemed like too much of a coincidence. Still, she makes some good points about humanity's propensity for violence, how adults sometimes act like children. (And we wonder where the kids get it from!)

As civil and well-mannered as most of try to be in our daily lives, we all have our buttons waiting to be pushed. While Reza's characters move to the extreme end on the scale of human emotions, what she does so well in God of Carnage is make us think about how close we are to that breaking point.
Posted by Esther at 11:15 AM

I'm so glad you enjoyed the chaos and carnage, I loved it too when I saw it. Great review too and I hope they all win their Tony awards! They all impressed me as did you with your handling of the "...erupts in a way that you wouldn't think would be funny..."

Thanks, Dale! The four actors work so well together - really a terrific ensemble. I'm so glad I saw it.