I can't think of a more whimsical, romantic, magical theatre experience than Brief Encounter. It's like watching a 1930s movie come alive onstage - visually heightened and with all the boring parts left out.

The play, a production of Britain's Kneehigh Theatre, has been adapted with tremendous imagination by Emma Rice from the David Lean film, which was based on Noel Coward's Still Life.

Alec and Laura meet in a railway station cafe. He's a doctor who comes to her aid when she gets a cinder in her eye. Even though they're married with children, they are instantly drawn to each other. They're proper and reserved but there's no denying the spark between them. 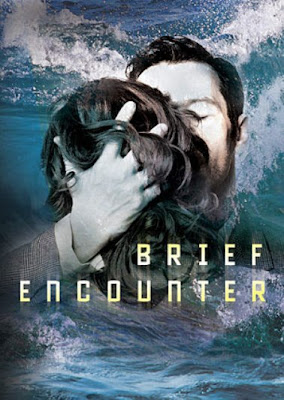 As Alec, Tristan Sturrock is absolutely dashing. He's the opposite of Laura's detached husband, played by Joseph Alessi, who doubles as the stationmaster. Hannah Yelland's Laura is beautiful and so expressive. You can see in her face how conflicted she feels.

Watching their relationship develop reminded me of how incredibly sexy those old movies could be without the lovers getting completely undressed and jumping into bed.
After they've been out on a lake - in a rowboat onstage - Laura takes off her blouse to let it dry. Alec helps her put it back on and buttons it for her in a way that's completely chaste yet the underlying emotion made me feel positively tingly.
But this isn't merely a staid retelling. Brief Encounter is truly unique and captivating.

You get into the mood even as you walk into the theatre. Uniformed ushers, dressed like old-fashioned hotel bellhops, walk up and down the aisle. A quartet of singers and musicians are performing.

And I love the way Noel Coward's songs, which I'd never appreciated before, are performed by the supporting characters, who are pursuing their own love affairs. Alessi's stationmaster lusts after Annette McLaughlin's Myrtle, who runs the restaurant; Dorothy Atkinson's Beryl, the waitress, flirts with Gabriel Ebert's Stanley, who sells chocolate bars.

The projection design by Gemma Carrington and Jon Driscoll allows actors to step into and out of the movie in a way that seemed magical. Simon Baker's sound design makes the wind howl and the ground rumble and the waves crash. Neil Murray's design and costumes made me feel like I was looking at a big toy train station come alive.

But the special effects never felt gimmicky or threatened to overwhelm the love story at the heart of the play. A great show transports the audience and that's what Brief Encounter did so beautifully for me.

And if after 90 minutes you don't want it to end, you can join the cast for a rollicking concert at the back of the theatre. At the performance I attended, they played "We Are Family," "Time After Time" and "Don't Stop Believin'."

I could not help but go out into the cool night air smiling.
Posted by Esther at 12:45 AM

Great comments - we completely agree on this one!

I'm dying to see this show! I'm glad to see it didn't lose any of its luster in the move from St. Ann's. I didn't see it there - did you? Thanks for the great review!

Thanks, Sarah! Brief Encounter was presented with such style and imagination and yet, the romance came through so strongly. It really gave me a new appreciation for Noel Coward, too.

Thanks, Leigh! I didn't see it at St. Ann's, although I was there for Black Watch so I have some idea of the space. I was in the second row of the orchestra, which was great. It felt intimate.

I don't know what it would be like farther back in the orchestra or from the mezzanine but I think Brief Encounter works well in a large theatre. It didn't seem at all lost or swallowed up.

The only thing about Studio 54 is that I've found the sightlines can be bad if you're too far over to the side, so I try to avoid the far left or the far right.

Hope you get to see it! This and La Bete were by far my favorites of the six shows I saw on my trip to New York.

So thrilled you were as swept away as I was!

Thanks for the great review! I am even more looking forward to seeing it this weekend!!

I have yet to find someone that was not simply delighted when they left the theater for one reason or another! a gem, this one.

Thanks for the comments Steve, Jeff and Doug! It was delightful and I definitely was swept away. I wish there were more theatre companies bringing work like this to Broadway. Jeff, can't wait to hear what you think.