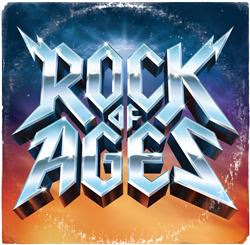 Gratuitous Violins rating: * out of ****

Well, I can't say I wasn't warned. I knew before I bought my (discounted, thankfully) ticket that Rock of Ages was a loud and not very good musical.

But I had a Monday night slot to fill on my trip to New York and I wanted to see something new. I'd seen the cast of Rock of Ages perform on Live with Regis and Kelly, and I listened to them on the Playbill Radio podcast and the show sounded like fun.

You know when you get really excited about seeing a movie based on the trailer and then realize that 2 1/2 minutes was the sum total of all the good parts? That's kind of how I felt with this musical.

The book, by Chris D'Arienzo, certainly had potential: a would-be rock star (Constantine Maroulis) and an aspiring actress (Amy Spanger) fall in love in Los Angeles. At the same time, a fabled Sunset Strip rock club is about to be torn down by an unscrupulous developer, (Paul Schoeffler).

There's an aging, lecherous '80s rock star with big hair (James Carpinello) who's brought in to try and save the day and a wickedly funny narrator (Mitchell Jarvis, who seemed to be doing a Jack Black impression.)

But Rock of Ages just felt kind of flat and crude instead of clever and inspired - more Spamalot than Spinal Tap. (Disliked the former, liked the latter.) This is one of those shows where everyone else around me was laughing and seemed to be thoroughly enjoying themselves, while I might have chuckled a few times.

Spanger is spunky and Maroulis is sweet and appealing. And I don't even mind cliches and a predictable plot if I care about the characters. But honestly, I didn't really care all that much about them.

Part of it was, I saw the show stone-cold sober while many of my fellow audience members took advantage of the in-seat drink service. (I think the couple sitting next to me had at least four beers apiece.)

Plus, loud doesn't even begin to describe the decibel level of this musical. Even before the show started, from the moment I walked into the Brooks Atkinson Theatre, the sound was overwhelming.

Now, I'll admit I couldn't name a Whitesnake song to save my life. Still, I was looking forward to hearing some familiar 1980s songs made famous by Journey, Styx, REO Speedwagon and Pat Benatar, among others.

But Rock of Ages doesn't present them in a way that made them all that interesting, just loud. And it seemed like they didn't even play the full version of the songs.

Still, I don't think it was a total waste. If I hadn't gone, I would have wondered whether I was missing something. And like my blogging buddy Chris says, you have to see a lot of shows to separate the wheat from the chaff, to know what works and what doesn't.

I'll just chalk this one up to experience - one of the less-successful chapters in my ongoing musical-theatre education. Judging from the reaction at the performance I saw, Rock of Ages has a fan base. But it wasn't for me.
Posted by Esther at 12:20 AM

Oh, thank you! I thought I was the only person who didn't care for this show and I wondered what was wrong with me. I'm glad I'm not the only one after all.

Oh no, you're not the only one! I knew it would be mindless but at least I thought I'd laugh a little more than I did. But like I said, the people around me seemed to be having a great time. But I was sober.

I loved this show. I thought it was the best Broadway show I'd ever seen. I guess the Tony nominators agree since it has 5 Tony nominations including Best Musical and Best Actor in a Musical (Constantine). In the 80's music WAS loud. I was going to clubs in the 80's and I know that. I still play my music and my daughter hates it. Sign of the times, I guess. Our generation loved it loud and this younger group likes it soft. But in saying that, I think the loud music lends itself to the time period this show was portraying. Don't ya think? Oh, and by the way, I didn't have a single drink, as I had flown to NYC, booked a hotel room and had no money left for that. So my enjoyment was not due to drinking.

Like Anonymous, I really loved this music, but I hated that the tunes were cut short. And the plot? One of the worst I've seen all year.

Just because a show gets a Tony nod doesn't mean it's any good.

I'm with you, Esther, and you, too Jeff.

"Spamalot" was the least of the four nominees that year, "Cats" put me to sleep. "Thoroughly Modern Millie" is shlock compared to "Urinetown."

In 1985, "Big River" won Best Musical basically by default while three other flops were nominated. It was so weak a season that they eliminated the awards for Best Actor & Actress in a Musical, as well as Choreography.

A Tony nomination, or an Oscar nomination even, isn't an assurance of quality, but a vote of financial confidence.

Ok, maybe I did get a little carried away with the comment about being sober. I was trying to be tongue-in-cheek. ;-) But you're absolutely right - at the show I attended lots of people seemed to be enjoying themselves and not everyone was drinking.

I'll admit I went to very few rock concerts in the 1980s and I'm more of a fan of Springsteen than Twisted Sister. But I did like and recognize quite a few of the songs in Rock of Ages. And I understand the loudness was was part of re-creating the atmosphere of that era.

Still, I think the creators of ROA could have been a little more imaginative in the way they presented the songs, instead of falling back on stereotypes and cliches.

Also, I kept wanting to hear the "entire" song instead of short snippets.

But I'm glad you loved Rock of Ages. I love Broadway and I want it to remain vibrant. I never wish any show ill. I'm glad there's such a variety of entertainment that appeals to different tastes.

Thanks for the comments, SOB and Kevin. In terms of a Tony nod, I would have picked 13 over Rock of Ages. It had an energy and a poignancy that I think was missing from ROA.

I was waiting to hear just how bad or good this might be and it put me in mind of my ill informed decision to see We Will Rock You, a musical slapped together with Queen music and terribly stale jokes. I wrote about it here and still shudder when I think of it. One of my favourite things about it was when I asked my friend at intermission if we should leave and she said 'but what if it gets worse?!'. It did.

Yeah, stale is a good way to describe the jokes. Or maybe it just wasn't my type of humor. But lots of people liked it and I don't want to begrudge anyone a good time.

Well, it sounds very nice! I'm adding it to my next NYC vacation's "Broadway's (maybe, if I'll have the time) Shows To See"!