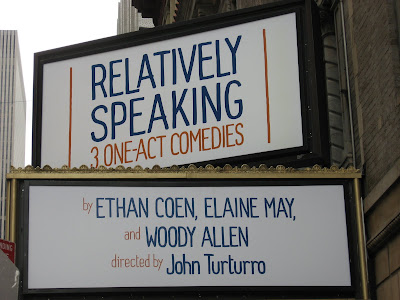 I was looking forward to the three one-act comedies that make up Relatively Speaking for two reasons: Elaine May's George Is Dead featured Marlo Thomas and Woody Allen's Honeymoon Motel because, well, it's by Woody Allen!

The third, Talking Cure, by Ethan Coen, was more of a roll of the dice. I've enjoyed some of the Coen brothers' quirky movies and they've written some great screenplays, including the Oscar-winning Fargo. So the odds are pretty good that it'll be funny, right?

Well, there's no polite way to say this: Coen's contribution was the worst thing I've ever seen onstage. I'm hesitant to even call the 30-minute Talking Cure a play because that would imply something actually happening. This was more like two extended scenes that went nowhere.

In the first scene, a psychiatrist, played by Jason Kravits, is talking to a man (Danny Hoch) who's committed a violent crime. I think the second scene is supposed to show us the origin of his anger and violence - his parents are arguing at the dinner table while his mother is pregnant.

The parents at the early preview I saw were played by Fred Melamed and Katherine Borowitz. Now I'm going use a spoiler alert here: Their conversation consisted of, basically, yelling "Hitler" at each other. It went something like this: (and I'm paraphrasing): "If Hitler and Eva Braun came to dinner, you'd cook a real meal!"

I understand invoking the Nazis for shock value or dark humor but this wasn't either. Frankly, it was embarrassing. Godwin's Law applies to theatre as well as the Internet. I'm not surprised that Melamed left the production earlier this month partly over differences with Coen. Talking Cure is ridiculous, juvenile and pointless. It's a shame that the producers couldn't have found something more worthwhile from a more deserving playwright.

Ok, end of rant. Luckily the next two plays got successively better.

Next up was George Is Dead, which I liked quite a bit, although it could have used some trimming. This was the first time I'd seen anything onstage by May, a veteran actress and screenwriter and one half of the comedy team Nichols and May, from the late 1950s and early 1960s.

Thomas played Doreen, a wealthy woman whose husband has just died while on a trip to Colorado. Bereft, she ends up at the New York City apartment of her beloved childhood nanny's daughter, played by Lisa Emery. Apparently, the nanny did everything for Doreen and she expects her daughter Carla to do likewise.

Thomas was almost unrecognizable in blond wig. Her voice was raspier than I remembered from That Girl. But she still has a great comic touch as a pampered, childlike woman. Emery was terrific as Carla, clearly drained by this unexpected visitor, trying to cope with her incessant demands, as well as deal with the needs of her own mother and husband. They both created memorable characters.

After intermission came Honeymoon Motel, the play I was most looking forward to seeing. I've been a Woody Allen fan ever since I was a teenager, back when he was really witty and original. Annie Hall is my second favorite movie of all time, topped only by Casablanca. Nearly 35 years later, the scenes and jokes are still vivid.

Honeymoon Motel takes place in the honeymoon suite of a cheap-looking motel after a Jewish wedding has disintegrated into chaos. The bride and groom, their parents, a rabbi, are all there, along with a few others I've probably forgotten. Even a pizza delivery guy shows up.

I don't want to give too much away but it's typical Woody Allen shtick: an outrageous situation filled with one-liners, self-deprecating Jewish humor and lots of arguing. And everyone was funny, especially Steve Guttenberg as the groom's stepfather, who's the source of all the tsuris. It was pretty thrilling to see Julie Kavner as the bride's mother. (Whenever she spoke I couldn't help but hear a little Marge Simpson.)

Usually I eat this stuff up - and Honeymoon Motel was my favorite of the three. I did laugh but to be honest, it was pretty boilerplate Woody Allen, nowhere near as good as his best movies and devoid of any memorable lines. I felt like it was something he could have dashed off in a couple hours, or maybe had in a drawer somewhere as a short story, ready to send to The New Yorker until Broadway beckoned.

So unless you're a Woody Allen completist - which I guess I am - or you have an incredible desire to see Marlo Thomas - me again - I would skip Relatively Speaking. Although even I wonder whether I should have picked something else.
Posted by Esther at 10:00 AM