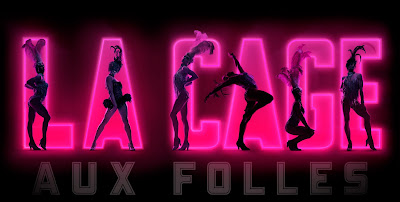 La Cage Aux Folles, at the Longacre Theatre on Broadway.
Gratuitous Violins rating: **** out of ****

While I knew the plot of La Cage aux Folles going in, until this Tony-winning Broadway revival I'd never seen the show on stage.

So Jerry Herman's unforgettable score was new. Combine that with tender, sensitive performances from Chris Hoch as Georges, owner of a St. Tropez nightclub, and Tony winner Douglas Hodge as the drag queen Albin, his life partner. Add a book by Harvey Fierstein that's humorous but never loses sight of the human element. Toss in some fun, athletic Cagelles.

What you get is a musical that captured my heart. With warmth and wit, La Cage aux Folles gets to the true meaning of family values: the love we show each other, the sacrifices we make.

In their 20 years together Georges and Albin have raised a son, Jean-Michel, the product of Georges' one-night stand. He's engaged to the daughter of the conservative Monsieur Dindon, head of the Tradition, Family and Morality Party. And when he brings his future in-laws home for dinner, he doesn't want the flamboyant Albin to be there.

Hodge, who transferred with this production from London's Menier Chocolate Factory, plays Albin as dramatic and insecure. He's an aging actor surrounded by the younger and more agile drag performers. He's a parent terribly hurt by the son he adores. The attempts to make him appear more "masculine" were funny but also heartbreaking.

Hoch, on in place of the vacationing Kelsey Grammer, was terrific. His Georges is steady and patient - a perfect counterpart and soulmate to Albin. He's wonderfully expressive: hilarious as he coaxes Albin out of his dressing room, stern as he reminds Jean-Michel of all the things Albin has done for the family. And he has a deep, beautiful singing voice.

Herman's songs illuminate the lives of these two men and their love for each other so well - an emotional "Look Over There" that Georges sings to his son, Albin's anthemic "I Am What I Am," the poignant "Song on the Sand" when Georges serenades Albin, and a stirring "The Best of Times."

There were times when I was moved to tears, including the scene at an outdoor cafe when Georges tries to hold Albin's hand, only to be warned away because someone is watching. The brief moment when they finally touch made me think about my friends who are gay and lesbian and how guarded they have to be with their affection in public.

From what I've read, this La Cage aux Folles takes place in a nightclub that's more rundown, with fewer dancers than in previous productions. It worked fine for me. I have rarely had as much fun sitting in my seat as I did when the Cagelles started tossing giant beach balls into the audience, which we swatted back onto the stage.

I liked the supporting cast, too: A.J. Shively in his Broadway debut as Jean-Michel plays a young man more misguided than mean-spirited. Robin De Jesus provided great comic relief as Jacob, the butler/maid devoted to Albin, who dreams of being a performer.

Fred Applegate was effective as the blustery, narrow-minded Monsieur Dindon. Yes, Dindon is a stereotypical bad guy but the hurtful things he says are mild in comparison with the bigotry of real-life antigay groups.

And talk about morality - contrast the way he browbeats his wife and daughter with Georges and Albin, who go through a charade, pretend to be people they're not, in order to make their son happy. When they affirm who they are, simply and with dignity, I wanted to cheer.

Last week I wrote about Grammer's absence and I questioned whether Hoch, who's younger, would be believable as Georges. Well, he won me over from the first scene until after the curtain call, when he put his arm around Hodge's waist and they walked offstage together.

A lovely recap. Makes me want to see it even more.

Reading what you were feeling as the show went on is so sweet. And it brings back memories of when I saw the original production in 1983. I felt exactly the same way... and you really hit nail on the head with your observation about gay/lesbian friends who have to be guarded in public. I am so there with you!

Thanks, Bob! In a way, La Cage reminds me of another musical I love, Hairspray. They're both about "outsiders," about accepting who you are. And they're musicals that deliver a powerful message without at all being preachy. Just warm and fun and tuneful.

I wonder how how I would have felt seeing it in 1983, when I don't think I knew anyone who was openly gay. Obviously, things have changed and La Cage resonated deeply because of that.

I think I still would have loved it, because the music and story are so great, the characters of Georges and Albin so appealing.

And thanks for talking me down off the ledge about Chris Hoch. You were right - he's a great actor and ought to be getting some leading roles!

I saw this show on Saturday night, it was my first Broadway show. I thought it was excellent! I was a bit dismayed to see all the understudies performing (I think there were four replacements) and was looking forward to seeing Kelsey Grammer, but in the end it really did not matter at all. Between the fine acting and the marvelously enthusiastic audience, it was a wonderful production.

Thanks for the comment, Kevin. And congratulations on seeing your first Broadway show! You picked a great one. La Cage truly is one of those shows that's so strong, it stands on its own no matter who's in it. And I still can't get the wonderful Jerry Herman score out of my mind. Hope you get back to Broadway soon.