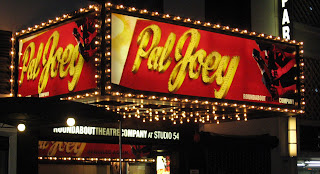 Gratuitous Violins rating: ***1/2 out of ****
After 11 shows in seven days you might think I'd be too exhausted to enjoy myself by the time the 12th and final one rolled around. But I'm always up for something new, and I thoroughly enjoyed the Roundabout Theatre Company's Broadway revival of Pal Joey.

First, I loved the whole look of the 1930s-era Rodgers and Hart musical, which takes place in Chicago and is based on a novel by John O'Hara. The sets, costumes and lighting all fit so well with the rather dark story of an aspiring nightclub owner and his relationship with three women who enter his life.

When I saw the show, early in its previews at Studio 54, Christian Hoff was still playing the title role of would-be nightclub owner Joey Evans. He injured his foot and has since been replaced by his understudy, Matthew Risch. (The show opens Dec. 18).

I liked Hoff as Joey, a second-rate song-and-dance man who'll do anything to further his ambitions. He's a smooth talker who's quite a cad when it comes to women. But I have to admit that a few weeks later, his performance has lost some of its staying power. Maybe he was too understated. Maybe he should have been more of a villain.

What's really stayed with me from Pal Joey are the performances of the three women who come into Joey's life. They were all wonderful, creating such memorable characters.

Stockard Channing, who has one of the musical's best-known songs, "Bewitched, Bothered and Bewildered," was great as socialite Vera Simpson. She becomes Joey's patron and helps set him up as a nightclub owner. Channing really gives off an air of a wealthy, sophisticated woman who toys with men, who's used to getting what she wants.

Jenny Fellner is a picture of sweetness as the small town girl who comes to the big city, where Joey picks her up in a coffee shop with a story about his "sick mother." In the beginning, Fellner truly believes that Joey loves her, and her song in Act II, "I Still Believe in You," was absolutely stunning.

But my favorite performance has to be Martha Plimpton as showgirl Gladys Bumps, who's been wronged by Joey and schemes to get her revenge. Probably my favorite moment in the show is when she sings "Zip," a song about a "girl reporter." Plimpton was hilarious, and of course, given the subject, I loved it!
I've never seen any other version of Pal Joey, so I don't know what Richard Greenberg's new book changed for this production. But under Joe Mantello's direction, the show moved along briskly and I liked the story. It was a very satisfying ending to a perfect week in New York City.
Posted by Esther at 12:04 AM