I think I was probably a senior in high school when I first became intrigued by theatre of the absurd. 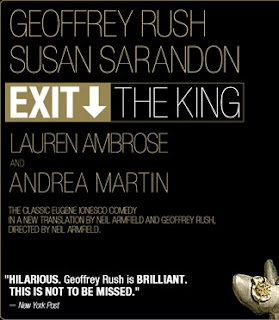 I've always been interested in cultural history - the way artists and writers respond to events going on around them. And I knew that many of the plays in this genre had been written in the aftermath of the death and destruction of World War II and the advent of the Cold War.

Back then, the questions those works raised seemed so deep and profound. - What was the meaning of life? Was human existence ultimately futile? (I could go on but it would just be morbid and anyway, you get the idea.)

My philosophical ruminating was all so theoretical, though. In those days before cable, even before VCRs, I don't think I ever actually saw any theatre of the absurd - I'd just read the plays and analyses of the plays.

So imagine my shock three decades later when I settled into my seat at the Barrymore Theatre to watch Eugene Ionesco's Exit the King and found those theoretical questions, embodied in Geoffrey Rush's Tony-winning performance, suddenly seemed all too real. This was no longer an intellectual exercise.

Rush plays Berenger, a 400-year-old monarch who, we learn right at the beginning of the play, is dying along with his crumbling kingdom, represented so well by Dale Ferguson's set and scenic design. (Best prop - the tiny suit of armor statue. I want one!)

I know this sounds like a cliche but Rush made me laugh and he made me cry (or come close to it.) He gives an incredible comedic performance as he tries to stall, bargaining for more time, unwilling to accept the inevitable - a little bit slapstick, a little bit vaudeville. It's almost as if they invented the phrase tour de force to describe it, he's such a commanding presence in this role.

But his performance is way more than simply doing shtick. There's a point where he gets serious and talks about wondering where the years went, learning to accept his fate.

I know Rush and director Neil Armfield, who first staged this production in Australia, intended the audience to see some modern political parallels. But honestly it was the personal, not the political, that made the biggest impression on me.

As a dying monarch working his way through the stages of grief, Rush made me think of people I've loved who are gone. He made me think about how 30 years can pass almost in the blink of an eye. Isn't that really the most absurd thing of all - how quickly time passes. Watching him at that moment was almost unbearable. And I mean that as the highest compliment.

But I don't want to give the impression that Exit the King is a downer of a theatre experience. It's a very funny play.

I thought Andrea Martin was hilarious as Juliet, the royal family's long-suffering servant. Brian Hutchison was great, taking a small role as the palace guard and playing it to the hilt. Lauren Ambrose was good as Marie, the younger and more adoring of Berenger's two queens who fawns over him and wants to spare him the pain of realizing that he's dying. And I liked William Sadler as the doctor who tries to give the king a big dose of reality.

As the older Queen Marguerite, Susan Sarandon seemed to be playing things a little straighter than everyone else in the cast. To some extent, that was her role - she's tired of Berenger, has no sympathy for him and wants him to accept his fate and just go already. I'm not sure Sarandon hit quite the right note but I've enjoyed so many of her movies over the years that it was great seeing her onstage.

I think my biggest criticism is that Exit the King does drag a bit. By the end of Act II, I was getting a little squirmy and just wanted the king to finally make his exit. When he does, it's one final, stunning moment in Geoffrey Rush's amazing performance. I am so glad I had a chance to see it.
Posted by Esther at 1:00 AM

You write the BEST reviews, Esther. I have never been a fan of theater of the absurd, but you make me want to see this one. Hmm... And I really enjoyed Rush's Tony speech. Very clever!

Awww, thanks Pam! But really, you should check out some of my fellow theatre bloggers on my blogroll. They're much more knowledgeable about theater than I am. I only wish my reviews were as good!