When I lived in Israel, I knew a few people who had become more religious than their parents. In some cases, the Orthodox Judaism that they chose was different than the religion in which they had been raised. Sometimes their families were understanding and accommodating. Other times, they were hurt and bewildered. 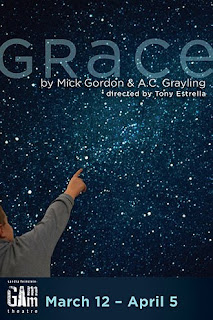 So I was looking forward to seeing the Gamm Theatre's production of Grace, by Mick Gordon and A.C. Grayling. Gordon, a playwright, and Grayling, a professor of philosophy at the University of London, examine what happens when a son raised in a fervently nonreligious home decides to give up a law career and become an Anglican priest.

The story is told mostly in flashbacks by Grace Friedman, a professor of natural science, played by Wendy Overly. A firm atheist, even though she doesn't like the word, Grace is taking part in an experiment to determine the parts of the brain responsible for spiritual experiences.

Overly does a great job portraying Grace's shock and anger. She's very secure in her nonbelief and her son's decision is a personal affront. It's a rejection of her values to side with "the nutters," the the bigots, the people who blow up innocents in the name of God.

As her son, Tom, Kyle Blanchette is appealing and sincere. He wants to show that religion can have a tolerant, moderate face, telling his mother: "I don't provide cover for sexist, homophobic, bigoted people who put bombs on planes. I did that when I was a lawyer."

I know faith is a difficult thing to portray and there's that stereotype about British reserve, but I wish the playwrights had done a better job explaining what really moved Tom to become a priest. I never got a clear sense of why religion had become such an important part of his life.

Still, it's interesting to see how each person in Tom's life reacts to his newfound faith.

Grace's husband, Tony, played by Jim O'Brien, is a secular Jew who seems content to let his son follow his own path. Whatever conflict he feels is deflected with humor. Tom's girlfriend, Ruth, played by Karen Carpenter, is an agnostic who loves him but wonders how his new calling will affect their relationship.

But while Grace is about religion and its use or misuse in the world, it's also about the relationship between parents and children. What I liked best was the back-and-forth between a son who has made a choice and a mother who can't accept it.

Unfortunately, that kind of pointed verbal sparring between Grace and Tom doesn't happen often enough. While the issues are intriguing and the characters are memorable, I felt that too often, they sounded like they were making speeches.

Call me old-fashioned but I like a good, linear story and realistic, convincing dialog. For me, Grace was a little too philosophical, a little too academic.
Posted by Esther at 11:00 PM