Anything Goes, at Broadway's Sondheim Theatre
Gratuitous Violins rating: *** out of ****

Set aboard an ocean liner sailing from New York to London, the Tony-winning Broadway revival of Anything Goes has a boatload full of colorful characters, a comical plot involving romance and mistaken identity and some dazzling choreography.

But what really makes this 1934 musical sparkle is Cole Porter's delightful score. It brings you back to a time when the popular music of the day came from Broadway.

Just look at a partial list of the songs in Act I: "I Get a Kick Out of You," "You're the Top," "Friendship," "It's De-lovely" and "Anything Goes." Some musicals don't have that many memorable numbers in the entire show. 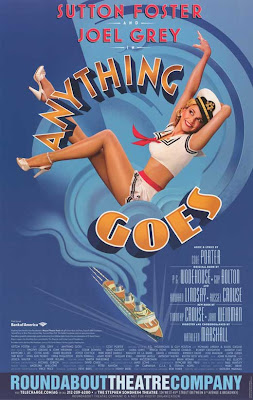 It doesn't matter that they don't always have much to do with the story, the lyrics are so witty and the tunes are so catchy. (Most of the songs were composed while Porter was a guest at Newport's Rosecliff mansion, which I visited two years ago as part of a birthday surprise thrown for me by my dear theatre blogger friends!)

The characters in Anything Goes are pretty broadly drawn and the cast plays them to the hilt. They all made me laugh: Adam Godley as the British Lord Evelyn Oakleigh; John McMartin as Wall Street tycoon Elisha Whitney; Erin Mackey as debutante Hope Harcourt and Kelly Bishop as her mother, Evangeline, determined to marry off her daughter to Oakleigh; Joel Grey as small-time gangster Moonface Martin and Jessica Stone as his sidekick Erma; and Colin Donnell as Whitney's assistant Billy Crocker, who's smitten with Hope.

A highlight was seeing Grey onstage. His chilling performance as the emcee in movie Cabaret is something I've never forgotten. At 79, Grey knows how to get the most out of every line and every mannerism and facial expression in a way that never seemed over the top. His rendition of "Be Like the Bluebird" was mesmerizing.

Then there's Tony winner Sutton Foster as Reno Sweeney. Foster brings a great comic touch to her duets with the suave Donnell in "You're The Top" and the charming Grey in "Friendship." But to me, she didn't exude the toughness or brassiness you'd expect from an evangelist turned nightclub singer. I've seen Foster in three musicals and I know I'm in the minority but I haven't warmed to any of the characters she's played.

I had a few other qualms about Anything Goes.

There are two Chinese characters that made me cringe. (The actors, Andrew Cao and Raymond J. Lee, made the best of the situation.) Some of the jokes went on for too long. And while Tony winner Kathleen Marshall devised a terrifically intricate tap dance for the title song, it also seemed to go on and on. I didn't find her work particularly inventive.

Still, I had a good time. This is a highly polished and entertaining production from the Roundabout Theatre Company. Despite showing its age a bit, Anything Goes remains buoyant. And you know I'll be picking up the cast recording!
Posted by Esther at 5:00 PM

"Some musicals don't have that many memorable numbers in the entire show." I think you should have said "most" rather than "some" - very, very few musical theater composers have given us the number of standards that Cole Porter did.

Thanks, Sarah! Since I'm nowhere near an expert on the subject, I was trying to be conservative!