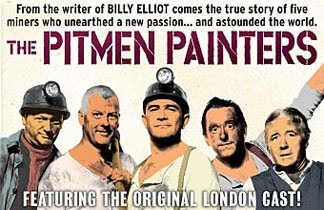 The Pitmen Painters, at Broadway's Friedman Theatre
Gratuitous Violins rating: ** out of ****

I was so looking forward to The Pitmen Painters, a play by Lee Hall based on the story of British miners in the 1930s who discover that they have a talent for art.

Hall wrote about miners in Billy Elliot, which I enjoyed. Plus, I have friends in northern England, so I'm familiar with the area and the accents. I even went down in a mine once, in Yorkshire. And did I mention that How Green Was My Valley is one of my favorite novels?

Well despite a fine cast, The Pitmen Painters left me kind of cold. There were too many moments where I was a bit bored, too much speechifying about art and politics and too little emotion. I wanted more insight into who these men were and what they loved about painting.

When the play begins, the miners' education association has hired an instructor, Robert Lyon, played by Ian Kelly, to teach them art appreciation. It soon becomes clear that most have never even seen a painting before. (Not all are miners - there's a dentist's assistant and a young man on the dole).

The interaction between Lyon and the men is funny and I did laugh. At the same time, I felt a little uncomfortable because I thought Hall based the humor on the miners' lack of sophistication. It's not their fault that they had to leave school at age 10 to help support their families.

Lyon decides that rather than have his students sit passively while he lectures, they really need to learn by doing - and after all, doesn't art belong to everyone, even the working class? So he encourages them to start painting.

Maybe Hall has compressed things, maybe there were other lessons in between. Because the miners progress from never having seen a painting to creating these terrific works of art. It's like there's no intermediate step.

Eventually, the men attract the attention of the affluent Helen Sutherland, played by Phillippa Wilson, and their work is exhibited. (In real life they were known as The Ashington Group.) Hall uses their growing fame to explore some interesting issues, like the fickle relationship between artists and patrons and the miners' reaction to this very different world.

As Oliver Kilbourn, the miner about whom we learn the most, Christopher Connel is very appealing and sympathetic. I thought the parts of the play where he talked about his life, how he came to work in the mines at a very young age, were among the most compelling.

Overall, though, I think the play got bogged down in discussions about what is art and who creates it and what does it all mean to the point where it started to feel like an academic exercise. I never felt the joy of painting like I did the joy of dance in Billy Elliot. There's not much passion in The Pitmen Painters.

One thing I did enjoy - in the end, a piece of artwork is created from scratch. The concrete act of watching someone draw a picture made for more enthralling theatre than some of the abstract discussions during the previous 2 1/2 hours.
Posted by Esther at 10:45 AM