It's a Wonderful Life

It's a Wonderful Life: A Live Radio Play at Trinity Repertory Company
Gratuitous Violins rating: **** out of ****

I wasn't sure what It's a Wonderful Life: A Live Radio Play would be like without Jimmy Stewart and the rest of the cast from the classic 1946 movie but I'm happy to report that onstage it's pretty wonderful, too.

Joe Landry's 85-minute adaptation is presented as a Christmas Eve 1949 radio broadcast from Manhattan, before a studio audience. There's a minimal cast - five actors play multiple roles and a Foley artist provides sound effects - but the story retains its charm and emotional pull. 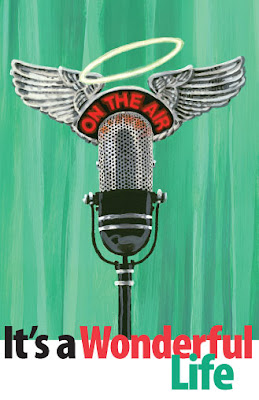 Just in case you're not familiar with the plot:

George Bailey dreams of an adventurous life far away from his hometown of Bedford Falls but ends up taking over the building and loan started by his father. Years later, facing financial ruin, he's on the brink of suicide, convinced that his family would be better off without him and wishing that he had never been born.

Fred Sullivan Jr. was absolutely endearing as George Bailey, a man who's always put the needs of his family, friends and community over his own. As his devoted wife, Mary, Angela Brazil was sparkling. I enjoyed watching them progress from young lovers to a married couple with kids of their own.

Timothy Crowe was a marvel, switching effortlessly from the rich and ruthless Mr. Potter to George's affable but not always reliable Uncle Billy. Stephen Berenson brought sweetness to Clarence, an angel who's sent to save George, and a comic touch to the kindly bar owner Mr. Martini. Anne Scurria was terrific as the flirtatious Violet and as the adorable Zazu, the youngest Bailey child.

The actors spend a lot of time in front of the microphones, scripts in hand. But when Clarence shows George what life would have been like in Bedford Falls without him, they play directly to the studio audience in a way that was so emotional and effective.

What the scaled-down set and cast did for me was to make the story more intimate. It's a Wonderful Life is about one man and his impact on a community, but it's also a moving portrait of small-town American life. And it struck me how much the story resonates today.

Home ownership - that cornerstone of the American dream - plays a major role in the plot. The Bailey Building and Loan Association made it possible for the working-class residents of Bedford Falls to get out from under Mr. Potter's usurious rents.

I'm certain that George Bailey never let anyone take out a mortgage they couldn't afford. I'm also certain that those first-time homebuyers bought within their means and understood how much their monthly payment would be. And everyone knew who held their mortgage.

This is the first year Trinity Rep has staged It's a Wonderful Life, in tandem with the theatre's annual production of A Christmas Carol. It's a great combination.

As much as I love the movie, there's something unique about watching a story unfold right before your eyes. It's a Wonderful Life is funny and poignant and absorbing. And in the end, there were tears in my eyes.
Posted by Esther at 9:45 AM

I'm so glad you like it, Esther. I really want to see this one, but didn't get tickets. I'm thinking about doing one of those last minute rush things. *fingers crossed*

I don't think the performance I saw was sold out. I have done the rush before and I've almost always been able to get a ticket. Good luck! Hope you get to see it.