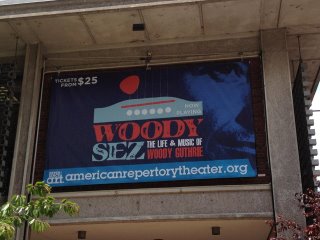 Woody Sez, at the American Repertory Theater
Gratuitous Violins rating: ***1/2 out of ****

My introduction to Woody Guthrie came in elementary school. We took a class trip to the symphony and at the end of the concert, we all sang "This Land is Your Land." It was nice and patriotic, nothing the least bit controversial.

As an adult, I read Joe Klein's biography, Woody Guthrie: A Life. I learned that Guthrie's most famous song was written in 1940 as a rebuke to "God Bless America." (I'm guessing we didn't sing the verse that included "By the relief office, I'd seen my people. As they stood there hungry, I stood there asking, Is this land made for you and me?")

In Woody Sez, David Lutken, who created the show with Nick Corley, also talks about learning Guthrie's music as a kid. He remembers singing "Riding in My Car" in nursery school. Then, he slips effortlessly into the character of the legendary folksinger, weaving together Guthrie's life and music in an absorbing and tuneful 90 minutes.

The other performers - Darci Deaville, Helen Jean Russell and David Finch - play various people in Guthrie's life and all four play lots of his music. The program lists more than two dozen songs and a variety of instruments including guitars, fiddles, harmonicas and two soup spoons from a thrift shop in Belfast, Northern Ireland.

This is an intimate show that uses folk music to evoke a turbulent time in American history: the Dust Bowl and the Great Depression. There are no video projections or special effects or turntable sets. The design by Luke Hegel-Cantarella is simple - wooden benches and chairs for the actors to sit on, photos of Guthrie hanging over a scrim with a scene that looks like it could be his native Oklahoma.

Lutken doesn't have Guthrie's nasally twang and he doesn't really try to imitate him. But he's a great storyteller, with an affable, conversational style that really drew me in. He explores how Guthrie's love of music was nurtured by the ballads his mother sang to him, by the songs he learned from migrants and oil field workers, and his wanderlust, how he crisscrossed the country in the 1920s and '30s, writing about the things he saw and the people he met.

I'm a big fan of Bob Dylan and Bruce Springsteen, both of whom were profoundly influenced by Guthrie and have covered his work, so I've heard some of these songs before. But hearing them in the context of their times and in the context of Guthrie's life, played simply and unadorned, made them more meaningful.

Woody Sez paints an especially vivid portrait of the Dust Bowl, a time when hundreds of thousands of families left the Great Plains for California. Once there, life did not turn out to be the "Garden of Eden" they imagined. Many of the "Okies" ended up as migrant laborers. Guthrie wrote about them movingly in songs like "Do Re Mi" and "Talking Dust Bowl Blues."

Through his music, Guthrie targeted the inequities in society and politicians of all stripes. Woody Sez notes that he was redlisted, blacklisted and all other kinds of listed. But it struck me that his songs, for all their seriousness, could be quite funny and catchy. There's a mocking humor and a scathing indictment in "The Jolly Banker," and you can sing along.

Woody Sez moves rather quickly through the last 20 years of Guthrie's life, ending with his struggle against the debilitating effects of Huntington's disease, which killed him in 1967 at age 55. After that, a reprise of "This Land is Your Land" felt incredibly emotional. I was choked up as I sang with everyone else.

And his songs, of course, are still topical. He wrote about the unemployed, about people losing their homes to foreclosures, about the rights of workers and the plight of illegal immigrants. He also wrote children's songs and Chanukah songs and songs about the great natural beauty of America - from the redwood forests to the Gulf Stream waters - and how it belongs to all of us.

Woody Guthrie was born on July 14, 1912, so this year marks his centennial. Woody Sez runs at A.R.T. through June 3. It will be performed at the Adirondack Theatre Festival in July and this fall at the Northlight Theatre, just outside Chicago. This is a beautifully drawn portrait of an important American voice and it deserves a wide audience.
Posted by Esther at 10:00 AM