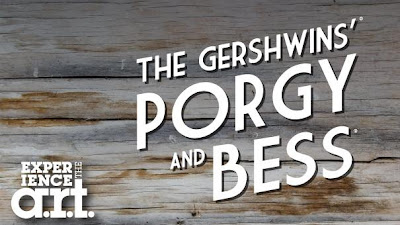 Porgy and Bess, at the American Repertory Theater
Gratuitous Violins rating: ***1/2 out of ****

I've mentioned that Porgy and Bess was never high on the list of musicals I hoped to see someday, for the same reason I spent decades avoiding Fiddler on the Roof. I was afraid it would be filled with stereotypical characters and dialogue that would make me cringe.

In both cases, I'm happy to report, I was so wrong.

I can't say much about the changes made by playwright Suzan-Lori Parks to DuBose Heyward's 1935 libretto. I don't know how director Diane Paulus' version of Porgy and Bess compares with all other versions. I'm not sure whether Stephen Sondheim will like it, if he sees it. All I can say is how this production affected me - and I was captivated.

Porgy and Bess takes place in a close-knit black enclave in South Carolina in the 1930s, where many of the men make their living from the sea. In some ways the inhabitants of Catfish Row reminded me of the Jews of Anatevka - hard-working people sustained by a deep and abiding faith as they try to survive in a world that doesn't regard them as fully human.

When Nikki Renee Daniels, playing Clara, a fisherman's wife, came out holding an infant - yes, a real baby - to sing the lullaby "Summertime," it was mesmerizing. Joshua Henry as her husband, Jake, could not have been sweeter, taking his son in his arms to give him some fatherly advice in "A Woman is A Sometime Thing."

I have to admit, there was something about seeing a baby onstage that got to me. (Nile and Mackenzie Lee, the twins of cast member NaTasha Yvette Williams, who plays Maria, alternate.) What a bold way to say that this not about stereotypes but real people, families. How could you not get drawn in to their stories?

But what made Porgy and Bess so moving was the romance at its core. Abandoned by her lover, Crown, who flees after killing a man, the drug-addicted Bess is shunned. Porgy, a crippled beggar, is the only one who will take her in. Watching this arrangement of convenience turn into real affection was stunning.

As Porgy, Norm Lewis simply won my heart. It was my first time seeing this veteran Broadway actor and he was so endearing - dignified and generous, never pitiful. When he sings "I Got Plenty of Nothing," you know he's probably happier than he's ever been before because, of course, he does have something - the love that this lonely man never expected to enter his life.

And Audra McDonald, ravishing in the fiery red dress she's wearing when we first see her, is remarkable as the tempestuous Bess. You can tell she's struggling - to stay away from drugs and drink, to be accepted by the community that has rejected her. With Porgy, you feel like she's found happiness and a home for the first time.

Of course you don't need me to tell you that Lewis and McDonald, a four-time Tony winner, have gorgeous voices. But they're also incredibly sexy in this musical and have great chemistry together. I loved the way Bess sat on Porgy's lap during "Bess You Is My Woman Now," as they expressed their feelings for each other.

Still, for all the tenderness, Porgy and Bess doesn't shy away from presenting the seamier aspects of life and the unsavory characters lurking on Catfish Row - or the era's stultifying racism.

The tone changed markedly when the musical's two white characters, Christopher Innvar's detective and Joseph Dellger's coroner, appeared and it was startling. The black residents grow quiet and extremely deferential, even as they're treated harshly and with disdain. It was a stark example of the fear that Jim Crow instilled.

I love being surprised by an actor I've never heard of before and that happened with Phillip Boykin as Crown. The sense of menace he brought to the role was palpable. Stocky and strong - he works on the docks as a stevedore - Crown was terrifying, a bully who preys on his own people. There's one very intense scene of sexual violence that was truly scary.

And David Alan Grier brought a light touch to the flashy dope peddler Sportin' Life, who looks down on his country cousins. He tempts Bess with "happy dust" and urges her to come to New York City with him. Grier was terrific giving his own cynical view of the Bible in "It Ain't Necessarily So." And Ronald K. Brown's choreography was fun to watch.

Now, I'm not saying everything was perfect. I though Act II felt slower paced than Act I. And at first, Lewis was dragging his bad leg at such an unnatural angle that I feared he'd do permanent damage. Traditionally, Porgy gets around in a cart pulled by a goat. But here, he uses a cane. I thought it worked fine.

The set by Riccardo Hernandez is pretty bare - evoking the simple wooden shacks of poor black Southerners. There's not much more onstage than a table and chairs. It was okay in the 540-seat Loeb Drama Center but I wonder if it'll get swallowed up in the 1,300-seat Richard Rodgers Theatre when Porgy and Bess moves to Broadway.

I'd read that this production changes the musical's ending, so I checked out the Wikipedia entry afterward. If you've seen Porgy and Bess before, the change is not what you may think it is. As someone who just assumed it was part of the original work, I found it compelling.

One of my favorite moments in the musical occurs near the beginning - the rousing, spiritual-like "Leaving for the Promised Land." It's so fitting because Porgy and Bess takes place around the time of a real exodus, the migration of 2 million African-Americans from the South to the North, Midwest and West in search of a better life.

What I think Parks and Paulus have done in the end is to bring us to that point of departure, with all of its anxiety and ambivalence. Both Porgy and Bess appear changed. Yet, there's always the temptation to go back to your old, bad habits. And despite the danger in staying put, it's difficult to leave the only home you've ever known.

Porgy and Bess premiered at the Colonial Theatre in Boston in 1935. Over the decades, its depiction of black life has made many African-American theatergoers and performers uncomfortable. The Gershwin and Heyward estates requested a revised production that would address those concerns and appeal to African-American audiences.

I can only speak for myself but what I saw was a warm, sensitive and nuanced portrayal of a community. I also think that the passage of time has helped. The characters in Porgy and Bess no longer have to stand for every black person. In the hands of this incredibly talented cast they are individuals - good and bad - and fully human.

Porgy and Bess runs through Oct. 2 at the American Repertory Theater in Cambridge, Mass. Broadway previews begin Dec. 17 at the Richard Rodgers Theatre, with an opening night of Jan. 12. According to the A.R.T program, the babies appear by permission of the Office of Attorney General, Commonwealth of Massachusetts. I have no idea whether there will be babies on Broadway but I hope so.

I've never seen (or heard) Porgy and Bess either but I'm intrigued, it sounds like you saw a great production. It's become easier for me as I get a bit older, to let myself be open to experiencing shows I may have prejudged for no specific reason. Glad you enjoyed it.

Thanks, Dale! I was impressed with the way it evoked life in this black community and made the characters so memorable. I didn't feel it was at all stereotypical, which was my fear. And the cast is wonderful - they're all such amazing performers!