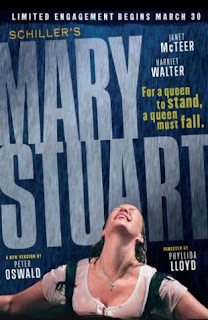 I've always been an Anglophile and I loved The Six Wives of Henry VIII when the BBC series aired in the United States in the early 1970s. But I'm kind of rusty on my Tudor history, so I did some quick research on Wikipedia before seeing Mary Stuart on Broadway.

And honestly, I think I would have been a little lost without that homework. There are terrific performances but the first act of this three-hour play was a bit of a slog for me. I couldn't quite figure out what roles everyone in the supporting cast was playing, who was loyal to whom.

Still, if I was feeling dazed and confused for the first 90 minutes or so, the brilliance and clarity of the second act more than makes up for it.

Mary Stuart tells the story of the clash between the Protestant Elizabeth I of England, played with steely resolve by Harriet Walter, and the Catholic Mary, Queen of Scots, portrayed by a fiery and passionate Janet McTeer, whom Elizabeth has imprisoned and accused of trying to overthrow her.

This is a new adaptation, by British playwright Peter Oswald, of a work by 18th-century German writer Friedrich Schiller. It won great reviews it was staged at at London's Donmar Warehouse several years ago with Walter and McTeer.

The women, and McTeer's nurse, played by Maria Tucci, are dressed in Elizbethan (I think) garb, while all the male courtiers and advisers wear modern suits.

I've read that this was a financial decision but it also highlights the different worlds that the men and women in this play inhabit. At a time when power normally was wielded by men, it makes Elizabeth and Mary stand out even more.

While I found the first act slow going, the second act, which opens with a fictitious meeting between the two queens, carries such tremendous force and intensity that Mary Stuart redeemed itself.

Anthony Ward's costumes and scenic design, Hugh Vanstone's lighting and Paul Arditti's sound combine for a stunning effect. This is where the struggle between these cousins and bitter rivals crystallizes and it's riveting to watch.

The performances by McTeer and Walter are wonderful. What I love is how distinct they make their characters.

McTeer's Mary is impetuous and headstrong and sometimes acts without thinking. She's warm and inspires devotion. Walter's Queen Elizabeth is Mary's opposite. She thinks to the point of almost being unable to act, or maybe that's part of her act. She's calculating and cold. (When I met Walter afterward, I was surprised at how small she is - she seems so imposing on stage.)

It was pretty fascinating to watch both women interact with their male advisers, wondering whom they can trust. Elizabeth especially is very canny in the way she uses them. I liked John Benjamin Hickey as the conniving Earl of Leicester and Chandler Williams as Mortimer, who remains loyal to Mary.

Even in Act II, though, there were a few things that didn't quite work for me - a scene of comic relief that seemed out of place, for one. And I thought the play was going to end several times before it finally did.

I think it's a tribute to both actresses that I wasn't sure how I felt about Elizabeth and Mary. Was Mary unjustly imprisoned or getting what she deserved? Did Elizabeth act out of a fit of pique or did she really have no other choice if Mary and her followers posed a threat?

So I'm glad I saw Mary Stuart, just for the thrill of watching Walter and McTeer play two fierce queens.
Posted by Esther at 9:45 AM

Hey, if you're ever in the mood to watch fierce queens go at it, come up to Boston and meet my friends.

Glad you liked Janet and Harriet. For my money, they were the two best performances of the season.

Oh Chris, I'd love to come up to Boston and meet your friends!

You know, I've seen so many wonderful performances in my last two New York trips that it's hard to pick out one or two. (Glad I'm not a Tony voter - I couldn't take the pressure!) But Janet and Harriet are certainly among the best!

First, Chris your comment had me rolling on the floor laughing!!!

Esther, I am a complete Tudor-phile. I love everything about that time period and have read a million books - fiction and non-fiction- about it. I would LOVE to see this play. I hope I have a chance someday!

Hey Pam,
Well a fellow blogger who's also a Tudor-phile loved it, so you probably would, too. There's always a chance that a regional theatre company in Providence or Boston will do it at some point.