Gratuitous Violins rating *** out of ****
In Shooting Star, a man and a woman meet by chance at an airport more than 20 years after their relationship ended. What might have been a quick hello turns into something more than that when a snowstorm cancels all flights.

Playwright Steven Deitz has written a bittersweet look at two very different people who were once in love, then their relationship fell apart. Now, they have an unexpected chance to catch up with everything that implies: the fond memories, the blame, the regrets. 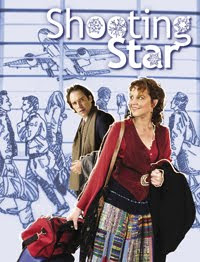 Reed McAllister and Elena Carson are portrayed in this two-hander by husband and wife actors Kurt Rhoads and Nance Williamson. The Trinity Repertory Company production is their 55th play together. (They've acted at Trinity Rep in the past and they're also veterans of New York's Hudson Valley Shakespeare Festival.)

The way Dietz has created this pair, it's a bit hard to imagine how they hooked up as students at the University of Wisconsin in Madison.

McAllister is the conservative businessman in suit and tie; Carson, the free-spirited liberal in a peasant skirt. And you get the impression they were much the same back in the day. But I guess opposites really do attract.

This is my first time seeing a play by Dietz, whose works are a mainstay of regional theatre companies. He definitely has a way with the clever one-liners. There's some pointed, witty red state/blue state jabs and a reference to National Public Radio pledge drives that got big laughs.

Rhoads and Williamson, directed by Fred Sullivan Jr., do a great job of taking what could be caricatures and making them seem like people you might know. These are two people who have been beaten down a bit by life and it shows. Williamson especially is terrific in the flashier, funnier of the two roles.

But the play is much more than a jokey reunion between the kooky liberal and uptight conservative. Dietz explores the pain and sadness that's occurred in both of their lives, the pent-up anger over slights that never got resolved, the disappointment at the way things have turned out.

There are some unexpected twists in the story and I have to give Dietz credit for bringing up a subject that could make some theatergoers uncomfortable. He does it in a way that I think is very sensitive and credible.

Shooting Star isn't the kind of play that wraps things up in a neat package, and I liked that.
Posted by Esther at 3:30 PM

Esther, did our paths cross again in a theater. I saw this play on Friday night. I loved it! There was one scene which I thought was over the top (Elena's phone conversation with Kersten), but otherwise it was excellent.

Hey Pam, thanks for the comment. I saw it a couple days later, on Sunday. I know what you mean about the phone conversation although it's kind of in keeping with Elena's personality, which is a bit over the top. Like I said in my review, I found it a little hard to believe that these two were a couple but maybe they each provided something that the other needed! And I did think Nance Williamson was especially terrific. It's nice to see some different actors at Trinity Rep.