Circle Mirror Transformation, at the Gamm Theatre
Gratuitous Violins rating: *** out of ****

At the beginning of Circle Mirror Transformation, which takes place in an acting class at a community center in a small Vermont town, I felt like I wasn't really getting the joke.

For example, when the play begins five people are lying on the floor. Each shouts out a number from one to 10, in numerical order. Except there's no determined speaking order. If two people say the same number at the same time, they have to start over.

Sure it was funny but what was it all about? I took a drama class in junior high school and I don't remember doing anything like that. I was a little worried that the play would be too insider-ish, that some of the satire about studying acting would be lost on me. 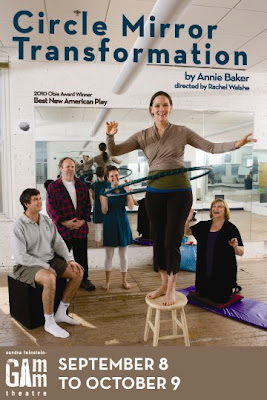 Luckily, playwright Annie Baker turns out to have a gift for storytelling. While some of the acting exercises baffled me, I was drawn in by the characters she's created. I liked the way Baker gradually peeled back layers to reveal more about the students and their teacher. This isn't the deepest work but it's an absorbing one.

Theresa, (Karen Carpenter) attractive and a bit flighty, is an actress who's moved from New York City to start a new career and escape a bad relationship; Schultz, (Normand Beauregard) is divorced and lonely, pining for the house he had to give his ex-wife in the settlement; Marty (Wendy Overly) is the motherly, enthusiastic teacher; and James (Jim O'Brien) is Marty's affable husband.

But my favorite was Amanda Ruggiero's Lauren, who takes the class hoping it'll give her an edge when she auditions for her high school production of West Side Story. Ruggiero has a teenager's sullen disdain down to perfection.

Circle Mirror Transformation has a running time of 1 hour, 45 minutes, without an intermission. There's only one set, a room in the community center. It looks like a dance studio, with mirrors and a barre at either end.

The play consists mostly of relatively short scenes, either during the class or between the characters beforehand and afterward. I think that brevity serves the story very well. Director Rachel Walshe keeps things moving along at a snappy pace and I never felt that it dragged.

As part of the class, each student has to tell something about themselves and later, another student retells their story, using their voice and mannerisms. Marty gets to "be" Lauren and she's just hilarious, really spot-in in her impersonation of a teenager. On the other hand, when Schultz portrays Theresa, it's poignant because you know he's smitten with her.

One exercise I did find a little hard to believe was when Marty asks the students to write a personal secret on a piece of paper, then everyone in the class picks one and reads it aloud. Maybe because I'm more guarded and cynical, I can't imagine anyone ever actually agreeing to do that. (And some of the characters are more honest than others.)

Circle Mirror Transformation is part of trilogy that Baker set in the fictional town of Shirley, Vt. I'd love to see the two other plays. She has a great feel for the way people talk - her dialogue always sounds real, never forced. And she understands the pace of life in a small New England college town since she's from one herself, Amherst, Mass.

My only criticism is that the people in this class seem to have a lot going on, maybe too much to be totally believable. Still, they held my interest. As we see how they've kept things hidden beneath the surface, it made me think of all the "acting" that we do in our everyday lives.
Posted by Esther at 11:15 AM

this was a very thorough and finely detailed description of the play and I agree with it completely!

Thanks for reading and for leaving a comment! It was a very interesting and entertaining work.