The Dreams of Antigone

When should justice be tempered with mercy? Is it permissible to disobey a law that you believe is immoral and would you risk your life to do so? And is your obligation to your family inviolable? Those are some of the provocative questions at the heart of a new version of Sophocles' classic tragedy Antigone. 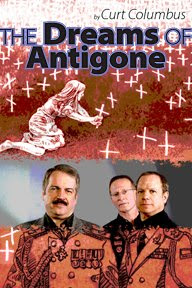 I'm rusty on my Greek mythology so I was concerned that I'd be a little lost during Trinity Repertory Company's production of The Dreams of Antigone, which runs through Oct. 26. But I needn't have worried. Artistic Director Curt Columbus has composed a modern retelling of an ancient story about morality and authority that under Brian McEleney's direction is clear and crisp and compelling. It was one of the most intense 90 minutes I've spent in the theatre this year.

The story opens at the end of a civil war in the Greek city of Thebes. After the expulsion of their father, King Oedipus, Polyneices and Eteocles are supposed to rule jointly, alternating years in power. But when Eteocles refuses to give up authority after the first year, his brother goes to war against him and they are both killed in battle.

Creon, their uncle, becomes king and declares that Polyneices is a traitor. He orders that his body be left on the battlefield, unburied, to rot. Anyone who disobeys that order will be put to death. Antigone, Polyneices' sister, defies her uncle's decree and buries her brother's body.

What happens next is a test of wills between the two - between Creon's demand that Antigone respect his authority and the rule of law and Antigone's assertion that the law is unjust and she has the right to disobey it, along with a moral obligation to give her brother a proper burial.

Columbus penned The Dreams of Antigone in collaboration with Trinity Rep's resident acting company. A few of the lines did strike me as a little heavy-handed in the way they tried to make a connection to the current political situation. But overall, I thought the play was very powerful and the language was completely accessible.

The Dreams of Antigone is staged in a way that gives you a lot to look at. Tristan Jeffers' set, with work benches and sections of Greek columns strewn about, evokes an ancient amphitheatre under construction. Polyneices and Eteocles do battle on raised platforms that are wheeled around the stage. And John Ambrosone's lighting shifts with the mood - dark in the beginning as Creon is working the crowd into a frenzy, then brilliant and bright at the end as the results of his actions become clear.

But I think what this production does so well is illuminate the issues that are at the heart of the story. As Creon and Antigone, Fred Sullivan Jr. and Rachael Warren give wonderfully complex, nuanced performances that could have degenerated into stereotypes - the ruthless dictator and the stark-raving madwoman.

Sullivan's Creon is a forceful king but not a tyrant. He does genuinely seem to believe that Polyneices is a traitor who gets what he deserves. He's willing to forgive Antigone the first time she defies him, but when she does it a second time, he has to act against her. He's trying to hold his kingdom together and cannot afford to look weak. In Sullivan's portrayal, I didn't get the sense that he took any joy in punishing Antigone.

Warren's face is just etched with grief over the death of her brother and anger that his body is unburied. Over the course of the play she becomes even more resolute in her convictions. No matter what Polyneices has done, he is still her brother. And that loyalty, that sense of love and moral obligation, trumps everything, to the point where she risks her life.

Ismene, Antigone's sister, played by Angela Brazil, and her fiance, Haemon, played by Stephen Thorne, who is Creon's son, give anguished performances as two people who are at their wit's end over her intransigence. Ismene desperately and unsuccessfully tries to get her sister to listen to reason. Haemon and his mother, Eurydice, played by Phyllis Kay, courageously take on the king to persuade him to spare Antigone's life.

In the beginning, I did side a bit with Creon. After all, wasn't Polyneices a traitor? Didn't his actions cause the deaths of innocent people? Maybe his body should be left out in a field to rot. But in the end, what would it accomplish? Would it act as a deterrence to others who might be plotting a revolt? Maybe. But I wondered whether Creon's decree, which he calls a matter of justice, was really just a way of giving in to the popular desire for revenge.

One of the most interesting aspects of the play is how Creon misjudges the shift in public mood. His anger at Antigone's defiance clouds his judgment. It's not about Polyneices anymore or what he did, it's about what the king has done.

Creon loses the backing of the army and the common citizens of Thebes. An aide, played by Joe Wilson Jr., tells him bluntly that the soldiers are afraid Creon's action may some day come back to haunt them. And when a cook in the royal household, played by Kelly Seigh, speaks movingly of her own husband, whose body was simply thrown in a mass grave, she summons up a great deal of sympathy for Antigone.

At first I thought, maybe Antigone was being unreasonable and selfish. The more sure of herself she seems, the more she also seems unhinged. She can't see what this crusade is doing to everyone around her. At one point, her stubbornness causes the city to lose a much-needed shipment of grain. Was that right? She put her feelings over the needs of everyone else. Finally, would her brother want her to sacrifice her life?

Eventually, though, Antigone's devotion to her brother won me over. No matter what he'd done, I understood that he was still her flesh and blood and in Warren's mesmerizing performance, I could see how painful this was for her. This was a matter of honor and familial obligation toward the boy who used to carry her on his shoulders to school, after all. And she truly believes that Creon's decree is unjust.

In the end, Creon relents, but it's too late, he's angered the army, the people, and the gods. His hesitancy in agreeing to an act of mercy that most likely would have cost him nothing ends up costing him everything.