The Addams Family, at the Lunt-Fontanne Theatre on Broadway.
Gratuitous Violins rating: **1/2 out of ****

Even though there's nothing remotely pink about it, I've settled on cotton candy as the perfect food metaphor for The Addams Family: tasty but not very filling.

Charles Addams' macabre cartoons first appeared in the New Yorker in 1938. Since then, they've been turned into a TV series and movies, video games and a musical variety show, to name a few incarnations.

Now, his characters known for looking on the dark side of life are in a splashy musical comedy, playing to some of the biggest crowds and with some of the highest ticket prices on Broadway. If you're visiting New York, it seems like a show that the whole family would enjoy.

And it's definitely a crowd-pleaser. The Addams Family has a large cast with actors who know how to deliver a joke, imaginative special effects, an impressive-looking set and a big Broadway sound.

While I enjoyed those things (as well as Thing), for me they weren't quite enough. 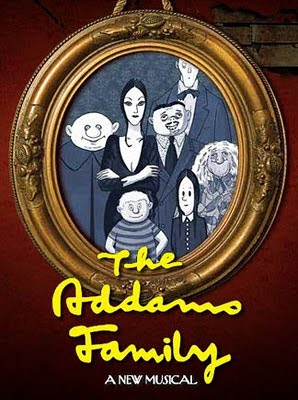 The musical starts strong, with the orchestra striking up the familiar TV-show theme by Vic Mizzy. A scene in a graveyard introduces the family and a ghostly chorus of ancestors with a lively ensemble number, "When You're an Addams."

I loved the Addams house - an old, creepy New York City mansion designed by Phelim McDermott and Julian Crouch. Together with puppetry by Basil Twist and special effects from Gregory Meeh, they created an appropriately ooky, spooky atmosphere.

If only the rest of the musical had been that stylish and clever.

Composer Andrew Lippa's songs weren't very memorable. I felt like I'd heard similar ones in other musicals and there wasn't much variety to the delivery either. Although I have to admit, it was glorious to hear a full-sized orchestra fill a Broadway theatre.

The book, from Marshall Brickman and Rick Elice, had too few examples of true wit. It relied on easy topical humor, with references to texting and swing states, and tiresome stereotypes - narrow-minded middle America. Those lines got laughs but I groaned.

The plot, instead of being inventive, was borrowed from La Cage aux Folles: Wednesday (Krysta Rodriguez) is bringing her boyfriend, Lucas, (Wesley Taylor) and his parents (from shudder, Ohio) home for dinner. She wants her "nontraditional" family to act "normal" for an evening.

Nathan Lane was a standout as Gomez - urbane, with a vaguely European accent. The man can wring a laugh out of me with even the most pedestrian lines. And the "Happy/Sad" ballad he sang to Wednesday, about his conflicting emotions as his daughter grows up, truly was touching.

With her tight, slinky gown and long, jet-black hair, Bebe Neuwirth looked stunning and as Morticia. I just wish she'd been given more to do besides her solo number, "Death is Just Around the Corner." (Corner - coroner, get it?)

Jackie Hoffman was a hoot as the salty, crotchety Grandma, even if the material felt mundane - telling Pugsley (Adam Riegler) to stop texting and open a book - and vulgar. (I mean, a pee joke?) And Kevin Chamberlin was sweet as the lovestruck Uncle Fester.

Lucas' parents, Alice and Mal Beineke, played by Carolee Carmello and Merwin Foard (subbing for Terrence Mann), were funny but their characters weren't the most interesting foils. Did anyone think they'd be able to keep Wednesday and Lucas apart? Did anyone care?

After a pre-Broadway run in Chicago, veteran director Jerry Zaks was brought in as a "creative consultant" to work with directors McDermott and Crouch. He tightened things up, put the focus more squarely on the Addams characters.

Maybe he did help but the problem was, after a dinner scene that ended Act I The Addams Family kind of fell apart in Act II. Everyone seemed to go their separate ways and the story drifted. I felt less and less engaged.

Still, despite the flaws I enjoyed myself. (Hey I was on vacation. What's not to like?) The Addams Family was fun - just not as inspired as I'd hoped it would be.
Posted by Esther at 9:30 AM