I'm glad Kristin Chenoweth is getting lots of praise for her reply to a Newsweek story that questioned whether gay actors can play straight roles. 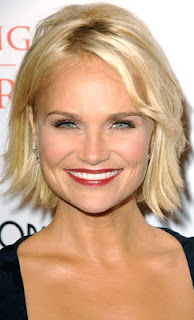 It's an eloquent and forceful answer to a ridiculous, offensive premise. There's one sentence I especially appreciated: “This article offends me because I am a human being, a woman and a Christian."

Thank-you, Ms. Chenoweth. It's nice to see someone use their religious beliefs not as an excuse to justify bigotry but as a mandate to speak out against prejudice.

Too often it's the most intolerant, reactionary elements who are the loudest and draw the most attention. It's easy to forget that there are many people of faith who are opposed to homophobia and are accepting, caring, committed to equality.

And really, this comment from Kieran on EW.com pretty much sums it up:

"I was actually shocked when I learned that Dustin Hoffman doesn’t really have autism, Helen Mirren never actually served as the Queen of England, Michael Douglas never worked on Wall Street, and Julia Roberts wasn’t really a hooker. My life is a complete ball of confusion. What next? Is Chewbacca really just a regular guy wearing a furry suit?"
Posted by Esther at 8:00 PM

Kristin Chenoweth's reply makes me love her even more. I'm always pleased when people are outraged by the bigotry and treatment of gays and they say it offends them because they are Christians.

Yeah, that was my reaction exactly. I'm so glad she included it in her reply.

Yes! And I so agree with the EW.com poster. I had the same shock when someone told me that Jim Caviezel wasn't really Jesus Christ.

When I'm sitting in the theatre, I'm getting into the character and the story. I'm not thinking about whether the actor is really gay or straight or they're just faking the American accent and they're really British or Australian. Or they're just pretending to be a Jewish mother.

And I just want to add, while I haven't seen Promises, Promises, I loved Jonathan Groff in Spring Awawkening and I love him in Glee!

I didn't realize Mr. Groff was gay (not that there's anything wrong with that) and I doubt I'll think about it again when I see him on Glee or in anything else. By the way, he was brilliant in Spring Awakening, you're right.

That was a great statement by Kristin Chenoweth, a perfect comment from Kieran and excellent analysis by you!

Hey Dale, thanks for the comment and quoting one of my favorite Seinfeld lines! Yeah, I love Jonathan Groff and would watch him in anything. I'm hoping I'll get to see him in a play someday.