I saw the movie 1776 on a school field trip, in one of those single-screen theaters that used to exist before the invasion of the multiplex. 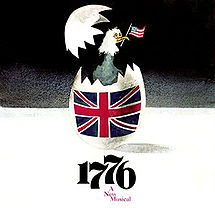 At the time, I didn't know it started as a Broadway musical. And while I was an American history buff, the Colonial period was not my favorite.

Okay, maybe 1776 wasn't a totally accurate account of the writing of the Declaration of Independence, but the music and the story were captivating.

The score, by Sherman Edwards, was by turns playful ("Sit down John,") lyrical ("He Plays the Violin") and haunting ("Molasses to Rum").

And Peter Stone's book made the men who assembled in Philadelphia in 1776 seem so distinct and memorable. It made history very entertaining.

I bought the soundtrack, which I still have in my record collection. (Yes, it was that long ago and yes, I still have my records.) While I haven't listened to it or seen the movie in ages, the experience has stayed with me.

It's amazing to think about how much has changed since the movie came out in 1972. Sandra Day O'Connor was serving in the Arizona Senate and Barack Obama was 11 years old. I'm not sure I'd ever seen a musical on stage, let alone on Broadway. 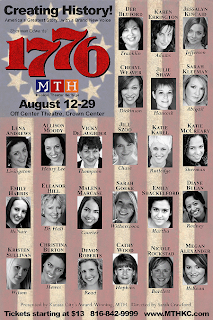 Here's something else that I couldn't have imagined along with a woman on the Supreme Court, an African-American in the White House and my first Broadway show.

In August, a Kansas City company called Musical Theater Heritage is presenting the first a all-female production of 1776.

To me, it's a reminder that U.S. history has been about breaking barriers, taking risks, expanding equality and creating opportunity, in the arts and elsewhere.

Happy Independence Day!
Posted by Esther at 9:30 AM

The Broadway cast album is far superior to the movie soundtrack - BETTY LYNN BUCKLEY IN HER DEBUT! Hopefully, you'll check it out.

I will! I don't think I have 1776 on cd so that would be perfect to add to my collection.

I have the OBC, OLC, Film Soundtrack and revival cast. The original is really the best - sharp orchestrations by Eddie Sauter give it a greater period feel. The film is superb because it features so many Broadway cast members!

Thanks, Kevin. I will definitely look into the OBC. Funny how I loved the film but had no idea at the time that it had been on Broadway!

And you haven't lived until you've heard Betty Buckley talk about getting the gig - her FIRST day in New York City. She was so green - and with such a Texas accent - she said "he bows and he bows" like bend over bowing, not bowing as in using the bow on the strings. Anyway, then she sings it in her much lower voice but with all of the emotion from the that original recording 40 years ago.

Hey Esther,
I just caught up on your blog, going way back. Congratulations on all your great writing. It's really fun to read.

Awww Milly, thanks. Hope you weren't too bored!

Hey Sarah, wow, what a great story. Ok, I need to get that recording! It's been so long since I've listened to the score and never with Ms. Buckley, of course.

I'm fairly certain a company in Chicago did an all-female production of 1776 a decade or more ago, but I can't find any info about it online.

An all-female production does sound pretty interesting. I'm all for trying nontraditional casting!