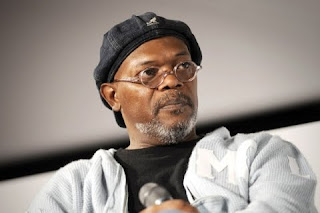 I know it's called acting and it's wrong of me to prejudge but I'm having a hard time imagining Samuel L. Jackson, who's nearly 63, portraying 39-year-old Martin Luther King on Broadway in The Mountaintop.

The play, by Katori Hall, imagines an encounter between King and a maid in a Memphis motel room on the night before his assassination. The producers have announced that they'll begin previews Sept. 22 at the Jacobs Theatre.

I love seeing actors onstage whose work I've admired from movies or TV. I think it's great when they generate excitement and bring people to the theatre who wouldn't have come otherwise. But the actor has to be right for the part.

Maybe I'm totally wrong and Samuel L. Jackson can "play" younger. Perhaps the playwright believes he's just perfect for the part - or has just resigned herself to the economic reality of mounting an unknown work on Broadway. Maybe it's been so long since King's death that it no longer matters.

I usually don't get too hot and bothered about this. I realize it's a business. But my initial reaction is that having an actor who's nearly 25 years older than the real-life figure he's playing is ridiculous. It's the worst kind of stunt casting because it ignores the role, not to mention the paucity of leading dramatic roles for black actors.

Now I realize that The Mountaintop would have no chance of getting staged on Broadway without a "name." But couldn't the producers have found an African-American actor from TV or movies who was more age-appropriate? (For example Jeffrey Wright, a Tony winner who played King in an HBO movie, Boycott.)

Could you imagine a 63-year-old white actor in the lead of a Broadway play about the last night of John F. Kennedy's life? I don't think so.
Posted by Esther at 10:00 AM

You are so right! Especially your last two points, though Jeffrey Wright proved he couldn't carry a show with A Free Man of Color. On the other hand, it is a role he's familiar with.

Thanks Jeff! It's almost like the producers think black actors are interchangeable. I wonder how Katori Hall feels - probably excited to get her work on Broadway but mixed feelings about Samuel L.

I wouldn't totally judge Jeffrey Wright by A Free Man of Color. I mean, that thing sprawled all over the place. I think it would be much different with a two-hander, single set play. Plus, the subject of The Mountaintop is probably a lot more interesting and accessible to people.

It seems odd to imagine him in the role for sure.

It made me think of my recent Billy Elliot experience where the actor/dancer playing Billy was Asian while the rest of the cast was Caucasian.

While I don't usually have a problem with colour blind casting, for some reason, I had a hard time reconciling it on the night I went.

Maybe there's still hope for me to be the white guy in an otherwise all black production of A Raisin in the Sun. I'll make it work! :-)

Let me start off by saying that I agree with virtually every word you've said here. Also, let me admit that my first reaction on hearing the news of this casting was a mixture of disbelief and dismay. However, reading your very well thought out piece has caused me to think further on the matter and I now find that I have reservations about my own initial criticism. Firstly, Jackson is in much better physical condition than the average 60+ year old guy. I believe he may have played sports in college and, if memory serves, he's an avid golfer & pick-up basketballer. So it seems very likely to me (providing he shave off that grey beard) that he can portray a man 20 years younger with sufficient vigor to make it believable. If anything, he may be too fit looking for the role. I think that James Earl Jones is, and looks, much too old to play the younger version of the Driver in "Miss Daisy" but, judging by ticket sales, not a lot of people seem to be bothered by it. My other reservation comes under the category of: "Why pick on Sam?". I mean every year there's a spate of films starring either Jack Nicholson, or Woody Allen, or Al Pacino, or Harrison Ford, or some other actor far older than Sam Jackson. And in these movies we are asked to believe that the most beautiful, smart, accomplished, 20 something year old women are deliriously attracted to these septuagenarians. I ask myself (and you) which is less believable: Sam as King, or Woody as Mr. Right? I say let's give Jackson a shot and hope he does a great job. Given who he's asked to portray I'm confident we'll get his best effort.
Thanks for getting me thinking!
'K'

I don't think age of actor matters. In opera, 50 year old divas play teenagers all the time. On Broadway right now, Donna Murphy is playing an aged grandmother and she's the tender age of 53. In movies, age of actor vs age of character is completely skewed - when Angela Lansbury was in her 30s played mother to both Elvis and Lawrence Harvey who were only a few years younger than her. If Samuel L. Jackson, who is accomplished, can act it and will probably wear a wig and makeup - what difference does it make? The whole point of theatre and acting is the suspension of disbelief.

Thanks so much for the comments! Sorry I'm late responding.

Hey Dale, Yeah I know you're supposed to suspend disbelief in theatre but sometimes it's easier than others. With Billy Elliot it's so much about the dancing - more than the acting, I think, that it almost doesn't matter whether he looks like the rest of his family. But I understand what you're saying.

K, thank-you so much for your thoughts on this. I guess the reason this particular casting got to me is because Samuel L. Jackson, unlike Jack or Woody or Al, will be portraying a real person. But like you said, he's in good shape and looks younger. I'm very interested in the story so I will give him a chance!

Thanks, Sarah. I guess it was just my gut reaction and my wish that a younger actor would get a chance but you do make good points.