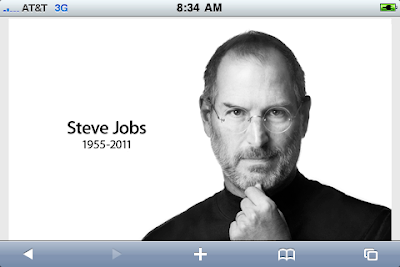 When I found out yesterday - reading a news bulletin on my iMac - that Apple cofounder Steve Jobs had died, it hit me hard.

It's not just that Jobs passed away much too young, at age 56 of pancreatic cancer. Thinking about what all of those sleek and shiny iMacs, iPods and iPhones have allowed me to do in the 21 years since I purchased my first Apple computer is mind-boggling.

I took a class in college on the computer programming language BASIC and it was not a wise move. So back in December 1990, the thought of owning a personal computer was daunting. But Apple made it easy and elegant and fun.

Here's a brief trip through my Apple fangirl history:

Macintosh Classic: Truthfully, I couldn't do much with it. The World Wide Web hadn't even been born yet. I played a lot of games: Railroad Tycoon, Sim City, Where in the World is Carmen Sandiego. If they made an Apple version, I bought it. You couldn't be too choosy.

Macintosh Performa. This was a big step up, it had a bigger monitor and I think it was color. I was on Prodigy for awhile, then America Online. It was considered much too scary to go onto the Internet without someone holding your hand. And remember newsgroups? Are they still around? I used to read them a lot.

PowerBook: My first laptop, which I bought when I moved to Israel for a year. I remember the thrill at finding my first freelance article online. I realized that my audience wasn't limited to people who had a physical product in front of them. Anyone, anywhere in the world could read something that I'd written.

iMac: My first "i" purchase. Goodbye floppy drive, hello CD-ROM. This was where I first uploaded my entire music collection onto iTunes, then onto my first iPod, downloaded my first podcasts, wrote my first blog posts. I got a good 10 years worth of use out of it before it just got too slow.

iPhone: I never thought I'd need to carry around a personal computer in my pocket. Then for a couple of weeks this year, I was housebound without Internet or cable. I used it for e-mail, to check Twitter and Facebook. I read the New York Times, listened to music and streamed movies. It was my link to the outside world.

Like I wrote in August when Steve Jobs stepped down as CEO, his genius was in coming up with products that you never think you'll want but once you have them, you can't imagine ever living without them.
Posted by Esther at 9:15 AM

Apple is simply "Beauty with Brains" I hardly eat Apple but its part of my life 24hrs 365 days & always, I am loving it. Hat's of to Mr Steve .

Thanks for the comment Rahul. In the early 20th century, automaker Henry Ford said that you could have any color Model T you wanted, as long as it was black! We've come a long way since then and people want beauty with the objects that they use every day. I think that's part of Apple's appeal. The products are stylish, as well as being fun and easy to use.