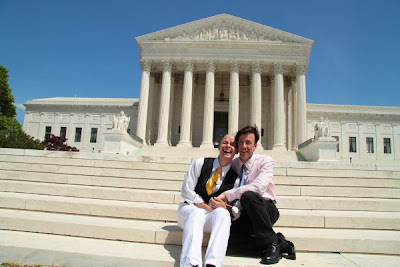 Watching Married and Counting made me sorry that Stephen Mosher and Pat Dwyer have completed their wedding tour because I would love to have been a part of it. But I'm glad that I got to join them for the world premiere of the moving documentary chronicling their journey.

New Yorkers Stephen and Pat have been a couple for nearly 25 years when they embark on a quest to get married in every place in the United States where it's legal for gay couples to do so - including California, where its status kept changing.

I've read Stephen's blog and I met him in April. Until Saturday, I'd never met Pat. The screening at the Rhode Island International Film Festival was not only my first world premiere - pretty exciting - but the first time I've watched a film with the subjects in the same room.

It's a credit to director Allan Piper that I was so absorbed by their story I didn't think about how they were sitting a row in front of me. Ok, one time I got a little self-conscious thinking I might have laughed too loudly at an old picture of the two of them. I cried, too. How could you not at a film about weddings?

Piper says he's made a love story and that's true in more ways than one. Getting to know Stephen and Pat as they talk about their lives, seeing them with their families, watching them deal with the stress that goes into planning multiple weddings was captivating. I fell in love with them and their band of devoted friends who strive to make each ceremony unique.

Narrated by George Takei, this is also a film that gives you a great sense of place. We travel from New York City to New Hampshire, Vermont and Massachusetts, to Iowa and California and Texas, to Washington, D.C. We're in people's homes, under a covered bridge, on the steps of the Supreme Court and on the beach at Coney Island. It feels like a road trip.

But it's also a journey through the lives and experiences of these two gay men. Along the way, we hear about how Pat and Stephen met in college and fell in love. They talk openly and with great emotion about their struggles to be accepted by their families. We get a glimpse of that when they return home to Texas for a visit.

I'm glad the film focuses on a couple who've been together for so long. If they were heterosexual teenagers who'd known each other for five minutes Pat and Stephen would be able to get a government-issued marriage license anywhere in the United States. But these two responsible, taxpaying citizens - who've been together a quarter century - can't do that.

When Pat drops off their rental van in New Jersey, a state that does not recognize their marriage, he says, “It goes against my feelings about this country and what this country is supposed to be and what it can be." Mine, too. Making this country a more inclusive place does not hurt anyone. It only helps all of us. Marriage equality is the fair, decent, American thing to do.

It also struck me as I was watching how many times in movies, on TV and on stage I've seen gay men portrayed as tragic figures. The short film that preceded theirs, Rufus Stone, was a poignant contrast because it definitely fit into that category. Those are stories that need to be told but they're not the whole picture.

Married and Counting is refreshingly different - in a way, honestly, that more straight Americans need to see. This is a joyous, heartfelt film about a happy couple. Yes, they argue occasionally and there are disappointments and I'm sure there have been challenges. But they've built a strong life together surrounded by people who love them. They could be your relatives or friends or neighbors or coworkers.

After eight weddings, there's only one thing left to say: Mazel tov Pat and Stephen! May your second 25 years together be as fulfilling as the first 25.

For more information about Married and Counting, including upcoming screenings, you can visit the film's web site, follow it on twitter at 8weddings, on Facebook and on Tumblr. The film has also been featured in Time magazine.
Posted by Esther at 11:30 AM

Actually, Pat and Stephen have decided that the "wedding tour" is not over. Even though the movie's done, they will continue traveling to new equality states as they come on the map. With any luck, after November there may be Washington, Maryland, and Maine weddings on the horizon.

That's wonderful! It was such an honor to be at the premiere. Pat, Stephen and their friends won my heart. I can't wait for more people across the country to see the documentary - and hopefully hold more weddings!