Another milestone for civil rights 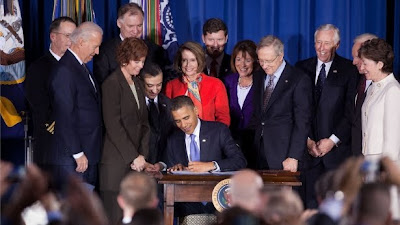 Obama's remarks were inspiring, especially a story he told about an Army private, Lloyd Corwin, whose life was saved by a fellow soldier during the Battle of the Bulge in World War II. Decades later he learned that Andy Lee, the man who rescued him when he tumbled 40 feet down the side of a ravine, was gay.

The president said Corwin "didn’t much care. Lloyd knew what mattered. He knew what had kept him alive; what made it possible for him to come home and start a family and live the rest of his life. It was his friend.

"And he knew that valor and sacrifice are no more limited by sexual orientation than they are by race or by gender or by religion or by creed; that what made it possible for him to survive the battlefields of Europe is the reason that we are here today."

Well, I get choked up just reading that anecdote.

Corwin's son Miles was present at the bill-signing ceremony. He's a former Los Angeles Times reporter who wrote about his father's friendship with Lee in 1993. (At the time, Lee didn't want his name used, so Corwin calls him Frank.)

Like most straight people, I've had the experience of learning that friends and colleagues are gay or lesbian. Sometimes it doesn't happen until years after we've met. I understand that coming out is a difficult decision. There have been times when I've hesitated to tell someone that I'm Jewish and the stakes aren't nearly as high.

But I'm always honored that my friends and colleagues have trusted me enough to tell me something so personal. It doesn't change the way I feel about them. Being gay or lesbian is simply an immutable part of who they are and knowing more about them makes our friendship stronger.

I'm fortunate to have a diverse group of friends. (It would be pretty boring if I only knew people who were exactly like me.) Lloyd Corwin was right - sacrifice and valor are no more limited by sexual orientation than they are by race, creed, ethnicity or gender. Neither are generosity, integrity, patriotism and friendship.

It's unacceptable that my friends who are black or Latino or gay would be treated as anything less than decent, honorable people, as less than full and equal American citizens. So when I read this on Twitter today, from a writer named Mark Blankenship, it truly moved me and made me smile:

"The US president just declared the honor of gay people and took action to defend it. What strange joy to feel welcome in my country."