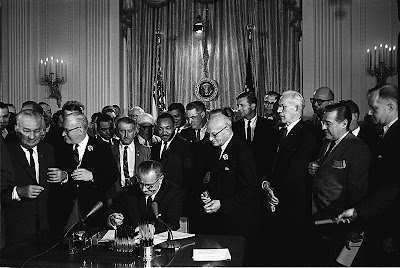 Senate Democrats and President Obama, shame on you for failing on a matter of fundamental civil rights like repealing "Don't ask, don't tell."

Is this the same party that in the 1960s won the struggle against racial segregation, that enshrined into law the right of black Americans to vote? You used to be good at this kind of thing.

Just a reminder, here is how you did it. With the vocal support of President Johnson, Sen. Hubert Humphrey and his colleagues managed to get the Civil Rights Act of 1964 through Congress despite entrenched Southern opposition.

And it was a bipartisan effort. On the day of the historic vote to end a filibuster over the bill, Republican Minority Leader Everett Dirksen echoed the words of Victor Hugo: "Stronger than all the armies is an idea whose time has come."

Here's another idea whose time has come:

Gay and lesbian Americans serving in the military, as in all other walks of life, should be able to live their lives openly and without fear. The time for requiring Americans to hide who they are in order to serve their country has passed.

Just like that vote 46 years ago, this is about one thing: equality.
Posted by Esther at 9:50 AM