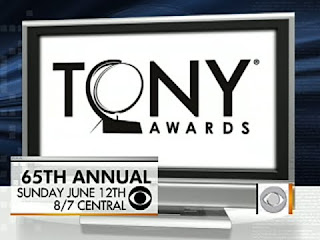 Some thoughts on the 2011 Tony nominations, announced this morning:

I was shocked (but in a good way) by 12 nominations, including Best Musical, for The Scottsboro Boys, which closed in December after a brief Broadway run. I'm so happy for Joshua Henry, Forrest McClendon and Colman Domingo, all of whom received richly deserved acting nods.

I thought Scottsboro was inventive and compelling for the way it told the story of nine black teenagers falsely accused of rape in Alabama in 1931. One of the last musicals from John Kander and the late Fred Ebb, it was profoundly moving and entertaining in the best sense of the word.

I'm also glad the Tonys recognized other performances I enjoyed from shows that have closed: Laura Benanti as a wacky model in Women on the Verge of a Nervous Breakdown; Hannah Yelland as a woman involved in a clandestine love affair from Brief Encounter; and Joanna Lumley's princess and artistic patron from La Bete.

And I'm thrilled for Judith Light, nominated for Best Featured Actress in a Play for her role as the wife of the Green Bay Packers coach in Lombardi. While I didn't love the play, I thought her portrayal of Marie Lombardi was sublime.

It's also great to see South Africa's Handspring Puppet Company receive a special Tony for War Horse. Their horse puppets were amazing and I was wondering how the nominators would deal with them. They don't fully belong in any category but they so deserve to be recognized.

The biggest surprise for me was Daniel Radcliffe being snubbed. He was so charming in How to Succeed in Business Without Really Trying. He sang sweetly, danced up a storm and had a flawless American accent. He should have received a nomination for Best Actor in a Musical. I would also have given a nomination to the lovely Rose Hemingway as Rosemary.

And I wish Nick Adams had gotten a nod for his very funny performance in Priscilla Queen of the Desert, which was shut out of the Best Musical category. I am happy his costar, Tony Sheldon, received a nomination. He totally inhabits his role as the transsexual Bernadette, an aging drag queen.

I also would have nominated David Hirson's La Bete for Best Revival of a Play. It got a lukewarm reception from the critics, even as they praised Mark Rylance's performance. But I absolutely loved the play. I thought it was clever, hilarious and thought-provoking.

Labels: How to Succeed in Business, The Scottsboro Boys, Tony Awards, War Horse