My favorite theatre of 2011 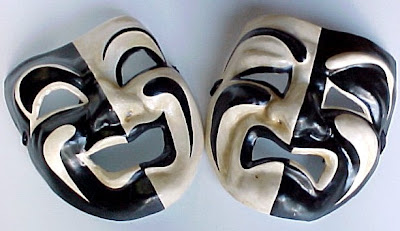 This year, it's easy to pick my favorite theatre. Tony Kushner's Angels in America, at the Signature Theatre, and Larry Kramer's The Normal Heart, on Broadway, stood far above anything else I saw in 2011.

Each playwright takes a very different approach to writing about the early days of the AIDS epidemic in New York City, and its devastating impact on gay men. But both tell absorbing stories brought to life by superb actors whose performances had me in tears. They are lyrical and angry and infused with humor and humanity and they will live in my heart forever.

The best of the rest:

Clybourne Park
This Pulitzer Prize-winning play by Bruce Norris, which I saw at Trinity Rep, draws its inspiration from A Raisin in the Sun. It examines how we talk about race in America both in the 1950s and today. The similarities and differences are at times subtle, at times in your face but always compelling. Norris's characters - why they behave the way they do - left me with much to think about.

The Mountaintop
Katori Hall's Broadway play imagines the final night of the Rev. Martin Luther King's life, in his room at the Lorraine Motel in Memphis. I was riveted watching Samuel L. Jackson as King and Angela Bassett as a hotel maid he encounters. I thought it was a fascinating look at the civil-rights leader not as an icon but as a man.

Follies
This Broadway revival was a great reminder of how great a musical can be when its stories and characters are truly original. Through Stephen Sondehim's songs and James Goldman's book, this is a show that speaks honestly - with humor and pain and poignancy - about what happens as we grow older.

How to Succeed in Business Without Really Trying
Maybe it had something to do with the rapturous reception for the endearing Daniel Radcliffe as aspiring executive J. Pierrepont Finch, but the crowd just carried me along on this one. It was hilarious and the story of what you have to do to get to the top resonates today. The Broadway revival of Frank Loesser's musical had me grinning from beginning to end.

Porgy and Bess
I saw Porgy and Bess in its pre-Broadway tryout at the American Repertory Theater. It was my first time seeing the show and hearing the Gershwin score and I was captivated. What made this musical so moving for me was the romance at its core. I thought Audra McDonald and Norm Lewis were wonderful together.

Candide
I loved Leonard Bernstein's glorious score and the story, adapted from Voltaire by Mary Zimmerman. This production originated in Chicago but I saw it at the Huntington Theatre in Boston. It was an exuberant, inventive and melodic tale about a young man's adventure-filled journey through life. There were so many twists and turns, quirky characters and shifting locations that I was enthralled.
Posted by Esther at 11:00 AM

Labels: Angels in America, Candide, Clybourne Park, Follies, How to Succeed in Business, Porgy and Bess, The Mountaintop, The Normal Heart

I did manage to see Daniel Radcliffe in "...Business..." and it was fantastic. The other best pick for me was a small production I saw at our local Theatre Passe Muraille called "Ride The Cyclone" which was quite brilliant. A high school glee club dies in a roller coaster accident and comes back to sing about what was and might have been. One of my favourite lines was a girl who earnestly says "There's a song in my heart and it's a medley!" and proceeds to sing a raucous gospel tinged ode. Up next is War Horse which finally opens here this year. Hopefully NYC is in the cards for the spring so I can add something great to my list. Happy New Year Esther!

Hey Dale, happy new year to you and your family!

I'm so glad you had a chance to see Daniel Radcliffe. The atmosphere in the theatre was just electric. Not so much that it overwhelmed what was happening onstage but enough to add to the thrill of being there!

I've heard some of my Toronto theatre friends on Twitter praise The Cyclone. It does sound interesting.

Hope you like War Horse. I loved the staging and the puppetry. It's a very unique show. You'll have to let me know what you think!

Hi Esther. I thought of you when I read that Tracie Bennett is headed for Broadway in "End of the Rainbow", a show I saw in London when I was last there. It was fantastic. You can read about it on playbill.com if you're interested or thinking of a trek to NYC sometime soon!

I'll be seeing War Horse here at the end of March and I'm looking forward to it. I'll skip the movie until perhaps afterward. Hope all is well!

Thanks for mentioning that! I'm going to New York in the middle of April and I was thinking about End of the Rainbow. I saw the trailer on the show website and it looked fascinating. Judy Garland is such an iconic figure from The Wizard of Oz and her life after that was so sad. I appreciate the recommendation.

I already have tickets for Once, Newsies, The Best Man and Evita. I'm also thinking about Death of a Salesman and Peter and the Starcatcher.

Hope you have a wonderful trip. I'm doing fine. Thanks for asking!

It was a brilliant show and I'm not an avowed Judy Garland devotee, just an interested bystander. Tracie Bennett blew everyone in the theatre away and I felt so lucky to have seen the show.

I just had an email about The Best Man and that's quite a cast, I may have to see it! I'll also investigate your other picks as well, thanks for the recommendations. I'm trying to see if I can get there at the start of April.

Have a wonderful time!