Why I'm mad at Mike Daisey

I saw "The Agony and the Ecstasy of Steve Jobs" in October and I had my doubts about how much of it was true as I was sitting in my seat at the Public Theater in New York. (Which I noted in my review.)

It was clear to me that Mike Daisey was delivering a performance with his monologue. The way his voice would rise and fall, the quotes and scenarios that seemed too perfect, it smacked of acting, not delivering a speech. And that made me wonder how much of his story about traveling to China and talking to workers who assemble Apple products was embellished. After all, we're paying $80 for a ticket and we want drama, emotion, conflict. 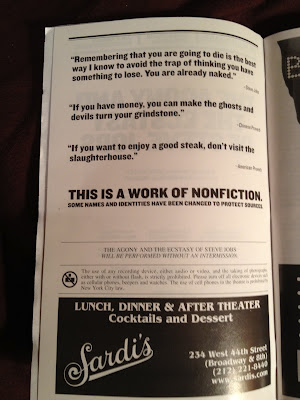 I also couldn't believe that the workers at the Foxconn plant were so eager to talk to him, through an interpreter. China is, after all, a repressive, totalitarian country. Daisey doesn't speak the language, doesn't know the culture. But as I said at the time, he's a performer not a journalist and he's allowed to take artistic liberties. Despite my reservations, I found the piece compelling.

So I wasn't surprised when the radio program This American Life, which had aired an excerpt of Daisey's show, announced last week that parts of it were fabricated. Quotes and some of the things Daisey said he saw on his trip to China were made up. I can't say that I felt let down because I wasn't totally taken in by it in the first place.

But then I found my program from the Public Theater and saw something that I'd forgotten. It says, in big, bold letters, that The Agony and the Ecstasy of Steve Jobs "is a work of nonfiction." Which clearly, it wasn't. That made me mad. He willfully misled his audience. And it wasn't necessary. With a little more effort and ingenuity, he could have written just as compelling a piece but made it truthful. On top of everything, he's guilty of lazy writing.

Then today, reading Daisey's response made me even angrier. Instead of taking responsibility it appears that he's trying to turn the tables, to shift the discussion from his work in a way that I find offensive.

He seems to think that by focusing on the deceptions in his monologue, we're being drawn away from the larger and more important question of how workers in China are treated. But he couldn't leave it at that. He chastises us for what he perceives as our moral failing. "If you think this story is bigger than that story, something is wrong with your priorities."

Well excuse me but I'm capable of doing both - being concerned about the conditions for workers AND the fallout from the lies in Daisey's monologue. I really resent his sanctimonious attitude. I'm not the one who sat in front of an audience, told them in the program that what they were about to hear was true and then lied.

I guess now, I feel less inclined to give Mike Daisey any more of my time or money.

If you want to learn something about Apple's manufacturing plants in China or the company's history and culture, I recommend stories from The New York Times and Walter Isaacson's biography of Steve Jobs. Both are authoritative and insightful.
Posted by Esther at 7:00 PM

A great response and thank you for posting the picture of your Playbill showing that he says it is a work of non-fiction. This answers a lot of questions I had about the show.

Yeah, I'd forgotten that statement was in the Playbill. You can't get much clearer than that! It's too bad because he had a lot of good stuff in the monologue and I think with a little creativity it could have been equally compelling and 100 percent true. Instead of making up encounters with workers he could have spoken honestly about the difficulty in gathering information in China, kind of like a more serious version of Chinglish.

I think my conception of the genre of nonfiction is more expansive than yours. I never believed his recounting was 100% factual--in my mind it was creative nonfiction (as I envision all theater pieces to be). As the play 8 showed me, sticking too much to the literal truth does not make for particularly compelling drama. I think part of my lax attitude toward Daisey's truth-bending is probably because many of the news stories of the industry's atrocities had already been published by the time I saw the show, so I knew the hard facts were available to me elsewhere. And having already seen the show, I didn't listen to the ATC radio excerpt.

I agree that Daisey should have been more honest in answering the fact-checking questions. But I still fault ATC for failing to adequately fact check. If they had such doubts, why take his word for it? If they had such doubts, they could (perhaps should) have decided not to air it in the first place. It seems that they were too eager to capitalize on his amazing (and popular) performance and in doing so failed to meet journalistic standards. This is a failing in the whole field of journalism right now, of course.

Jan, thanks so much for reading and for the support!

Mel, thanks for taking the time to read and comment.

I was perfectly willing to accept that the monologue was embellished and leave the theatre wondering what was true and what was stretched for dramatic purposes.

But by labeling the piece as nonfiction, Mike Daisey wanted to take that decision out my hands as an audience member. He wasn't leaving anything to my imagination. Rather, he was explicitly saying this was nonfiction. It would have better if he'd just left that line out of the program.

Maybe my definition is narrower. I think nonfiction means every quote and everything he witnessed was true.