Getting Kindled and iPadded

I always said I'd never get an e-reader. I like the feel of paper in my hands. I spend enough time staring at computer screens as it is. Plus, browsing in bookstores and buying books is one of life's simple pleasures.

Borders went bankrupt, greatly reducing my browsing options. And as much as I love buying books, I no longer have much room for them. Last year, for the second time in 15 years, I had to get rid of almost all of my books because I was moving and I couldn't couldn't take them with me. What's the point in amassing another collection that I'll only have to give away again?

Then last month I took the bus to Boston to see a play. I was in the middle of a good novel and I wanted to bring it with me but it was over 500 pages. It wouldn't fit in my bag and I couldn't see the point of lugging it around all day.

I went to Staples, which sells the Nook and the Kindle. They were both lightweight and small enough to carry in my bag. But one thing bothered me: the text blurs slightly when you turn the page on an e-reader and it was giving me a headache just trying them out in the store.

I bought the cheapest Kindle, at $79, since I wasn't sure how much I'd use it. It comes with advertising, which you see as a screensaver when the device is turned off or as a small band on the bottom of your home page. You never see it within the text of a book and it doesn't bother me at all.

So far, I've read a couple of books on it and I like it a lot. The blurring isn't quite as annoying as I thought it would be, although I don't think I'd like to read for hours on an e-reader. On the downside, it's not as easy to flip through an e-reader as it is a physical book. But it's extremely portable and I never have to worry about running out of something to read.

My other big purchase was an iPad. I bought the 32GB Wi-Fi model. I wanted something faster and lighter than my laptop that I could use on the couch to surf the 'net while I watch TV, maybe stream some video and send some e-mail. 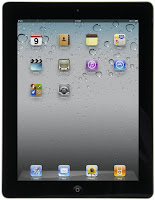 Here's the thing they don't tell you in the ads: it's difficult to get in a comfortable position with your iPad when you're sitting on the couch. When I rest it on my lap my neck feels strained from looking down at the screen. And it's too heavy to hold up for very long.

Apparently the connection between iPads and neck pain has been well documented but it was something that got by me until I bought one. Propping it on a pillow helps. If you're using it in bed, putting it against your knees might work, too.

On the other hand, the retina display is great for reading. I'm tempted to get The New Yorker for the iPad. I love the magazine but hate the way issues pile up. And the iPad makes a very good small TV when you fold back the Smart Cover to use as a stand. So far I've used the HBO GO and PBS apps.

My experience pretty much mirrors what others have said, that it's more a device for consuming than producing. For blogging and writing e-mail longer than a few sentences, I'll stick with my iMac. (I don't hate my iPad but I get the point of this Slate article.)

While I like the Kindle a little more than I thought I would, I like the iPad a little less, which is surprising given how much I've loved every other Apple product that I've owned. Maybe I bought into the hype and was expecting too much.
Posted by Esther at 7:20 PM

Hi, iPad twin! My iPad has actually grown on me. At first I wasn't sure I'd keep it, but it's been less than a month and I already can't imagine not having it.

I do like the iPad a lot, I just have to find a way to get comfortable with it on the couch! But it's great when I can set it up on a table or desk to read or watch something. In fact I brought a table out to my porch and set the iPad on it, and used the wi-fi from the house.

I'm also really enjoying the Kindle. You can't beat it for convenience. I've brought it on the train to New York, the bus to Boston, waiting in the doctor's office. I don't think I've turned my back on paper books entirely though. ;-)

I love my iPad and the Kindle app but still also love the feel of a book. I didn't think I'd ever find myself embracing an electronic version of a book over the real thing but what can I / we say? Ch-ch-ch-ch-changes!

I remember when we went from typewriters to computers - that seemed like a big change, too. ;-) The Kindle is great for travel. It's so lightweight. But I agree about loving the feel of a book. I don't think I'll give up on dead trees entirely!