President Obama's "We Shall Overcome" moment on gay marriage 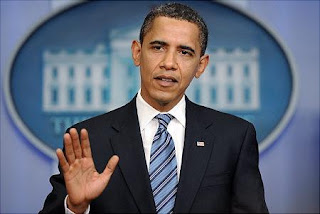 President Obama finally had his "We Shall Overcome" moment today when he endorsed the right of gay and lesbian Americans to marry the person they love.

Congratulations, Mr. President. It's about time.

Forty-seven years ago, President Lyndon Johnson addressed a joint session of Congress to introduce the Voting Rights Act. He talked about the efforts of black Americans to secure for themselves "the full blessings of American life." He said, "Their cause must be our cause, too." He even invoked the words of the civil-rights anthem, "And we shall overcome."

The president's remarks today saying that he believes same-sex couples should be able to get married were not as dramatic or momentous as Johnson's a generation earlier. Made during an interview with ABC News, they lacked the eloquence of a prepared speech.

There was no mention of repealing the odious Defense of Marriage Act. He didn't vow to fight for same-sex marriage. His deference to the states on the matter was a bit troubling. (States' rights, did that not ring a bell for anyone at the White House?)

Yet despite all of that his words, based on his own experiences and his religious convictions, sounded sincere. I like that he mentioned the Golden Rule: Treat others as you want to be treated. And they are powerful for the way they frame the debate. The president finally figured out how to use the White House as a bully pulpit.

It's practically impossible today for any straight American to say that they don't know a gay person. They are our friends, our family, our teachers, our colleagues, our loved ones, our neighbors.

As President Obama said, they are members of his staff, people in committed relationships. They are soldiers and sailors fighting on his behalf. Their children are friends with his daughters. The president of the United States made the issue personal. There are people in his life who are gay and lesbian. And he doesn't see any reason why they should not be allowed to get married.

Anyone - and by that I mean my fellow straight Americans - who cares about this country becoming a more equal place for all of its citizens has a stake in this. The president's comments don't change anything but they push homophobia and anti-gay rhetoric a little further to the fringes of American society - where they belong.

A couple of years ago, Frank Rich wrote in The New York Times that as more people have come out of the closet, we've learned about those in our lives who are gay. "It is hard to deny our own fundamental rights to those we know, admire and love."

I believe that with all of my heart. Today, I'm proud that my president believes it as well and was not hesitant to say it. Their cause must be our cause, too. That statement rings as true today as it did in 1965.
Posted by Esther at 8:25 PM

Beautifully said, Esther. I thank you.

Jeff, thank-you for reading and for your comment. It means a lot to me. Now we just have meet in person someday!