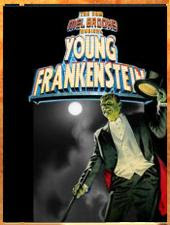 Friday's USA Today featured a fall arts preview. While reports on the season's upcoming movies, television shows and music were available online, theater got the cover of the Life section and a half-page inside. More specifically, the new Mel Brooks musical "Young Frankenstein" got the cover and the half-page inside. (With a small box listing other highlights of the Broadway season).

"Young Frankenstein" is my favorite Mel Brooks movie, and I've been looking forward to the musical version. Steve On Broadway already took in the tuner during its Seattle tryout and gave it an enthusiastic review.

Brooks, with his characteristic understatement, calls the cast, which includes Roger Bart and Megan Mullally, "the best ever assembled for a Broadway show." But he's silent on a controversy that's been raging over ticket prices, which will reach $450 for some center orchestra seats.

Coproducer Robert F.X. Sillerman defends them, saying [The select seats] "make up a fraction of the total ticket allotment, and so far, the demand for them is robust. We also offer $25 front-row seats, and the rest of the house is priced comparably to other Broadway musicals. Our tiered pricing is part of Broadway's ongoing effort to deal directly with customers across the economic spectrum by providing precisely the service and location they need at the price they can afford."

And the article makes no mention of another controversial move - the decision to depart from the customary practice of reporting weekly box-office totals. But Sillerman told The New York Times, “This is a private transaction. Consequently, I don’t know if there’s any — I’m quite sure there’s not any — bona fide business reason to do it other than bragging rights.”

The article, with more quotes from Brooks, as well as Roger Bart and director/choreographer Susan Stroman, is well worth a read.

I've got my ticket to Broadway's Hilton Theatre, where "Young Frankenstein" starts previews on Oct. 11 and opens Nov. 8. Although I can assure you I didn't pay anywhere near $450. Only time will tell whether Mel Brooks will have a hit on his hands to rival "The Producers." I'll weigh in with a review in November.

For his part, Brooks raises the interesting prospect that his next Broadway show might be based on an original idea rather than on one of his movies. And despite his notable success in film and television, he says his heart belongs to Broadway.

"This is much better than making movies, much more fulfilling. Things that happen under a proscenium arch are alive, they're immediate. When you hear that orchestra starting somewhere in the pit, filling the theater with music, you get goose bumps. A movie is great, but never thrilling like that."
Posted by Esther at 6:44 PM No comments: 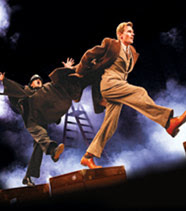 I came late to Alfred Hitchcock. The shower scene in "Psycho" sent me running into the bedroom for cover when I was a little kid, and over the years I've only grown more squeamish. But as an adult, I've come to realize that there's scary Hitchcock and suspenseful Hitchcock. Now, after having seen "The 39 Steps" in a pre-Broadway engagement at Boston's Huntington Theatre, I can add another category: hilarious Hitchcock homage.

Four actors play all the roles in the award-winning 90-minute British play. It's a virtually scene-for-scene retelling of the classic 1935 film starring Robert Donat as a man who finds himself caught up in an international spy ring. And the way it's done is absolutely inspired. In fact, it reminds me of another favorite of mine, "Wicked," in the way it reimagines a familiar story. I couldn't believe what was accomplished with a few low-tech special effects, some props and lots and lots of quick costume changes. Imagine a suspense story told in the style of a screwball comedy in which the male and female leads aren't in on the joke.

Charles Edwards, who plays the protagonist, Richard Hannay, is the only holdover from the British cast, and he's superb. Edwards has to be very serious and deadpan, like he doesn't realize there's a comedy going on all around him, like he really has been caught up in the middle of an international spy ring and accused of a crime he didn't commit. He's very suave, dashing, self-assured, not a hair out of place even as he flees for his life across the Scottish Highlands. The perfect 1930s hero. Even a week later, thinking about his escape across the top of a train makes me laugh. And the man sure does a lot with a raised eyebrow!

Arnie Burton and Cliff Saunders play all the other male roles. Much of what they're called on to do is very slapsticky, physical humor. They're identified in the program as "clowns," and that's the perfect description. They reminded me of a two-man circus act or a couple of old-time vaudevillians. They wear lots of hats, literally and figuratively! Rounding out the cast, Jennifer Ferrin is great playing three very different parts, although her turn as a secret agent did remind me a little of Natasha from "Rocky and Bullwinkle." But in a good way!

"The 39 Steps" isn't perfect. While the first act moves very quickly, things slow down a bit in the second act, which has two longish scenes, in a hotel and at a political rally. And I don't know whether it's just that I'm getting old or the actors weren't projecting well enough, but I was straining a bit to hear everything from the back of the orchestra. Also, it's difficult to say whether I would have gotten as much out of it if I hadn't seen the movie first. A big part of the fun comes from knowing what's coming next and wondering how they're going to pull it off. And there are some delicious shoutouts to classic Hitchcock movies that you'd miss if you weren't a fan. The great man himself even makes a cameo appearance!

Still, the play stands on its own even if you haven't seen the movie or aren't at all familiar with Hitchcock. I don't think I've laughed so hard, so consistently from beginning to end, at the theater all year. Or at a movie, for that matter. Yeah, maybe at times "The 39 Steps" is a little too self-aware, in an "aren't we clever" kind of way. But you know what, it is clever, and funny and wickedly entertaining.
Posted by Esther at 7:06 PM 6 comments: