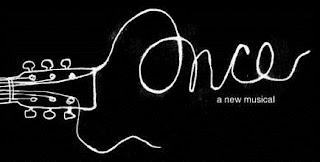 I can't think of the last time I've adored a new musical this much. Once is simply magical.
Posted by Esther at 1:57 PM 6 comments:

Death of a Salesman

Death of a Salesman, at Broadway's Barrymore TheatreGratuitous Violins rating: **** out of ****

I read the play in high school and a few years ago I watched a production taped for TV but until the current Broadway revival, I'd never seen Arthur Miller's 1949 Tony and Pulitzer-winner Death of a Salesman onstage.

Maybe it's because I'm inching ever closer to Willy Loman's age but this time, it really got to me. Under Mike Nichols' direction the play seemed direct and unadorned, without 21st century bells and whistles to detract from the characters or Miller's language.

Philip Seymour Hoffman's Willy has spent his working life traveling from New York City to New England, lugging his sample cases from store to store. Now in his early 60s, the driving has become too much for him but he can't afford to stop. His sons, in their early 30s, have not turned out the way he expected.

I loved Hoffman's performance. He's a very expressive actor, with a jowly face and a bit of a gut. At times, his mouth would drop open in sheer exhaustion. Then in the flashbacks he was full of energy and enthusiasm as he tossed a football with his teenage sons, boasting about his work and regaling them with stories about how well-regarded he was. 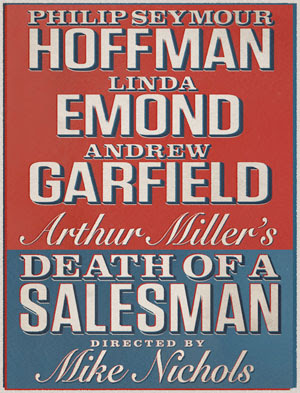 Perhaps it's because we live in a time of economic insecurity but the play also made me think how tough it must have been to retire in 1949, or if that was even possible. What did the Willy Lomans of the world do without Social Security or Medicare or a 401(k) plan?

It's the family relationships, though, that are at the heart of the play and they are wrenching. Death of a Salesman is about our dreams, our illusions, and how, over time, they can turn sour.

Sons, Biff and Happy, played by Andrew Garfield and Finn Wittrock, have turned out to be disappointments. Biff, a star high school quarterback, was destined for college but never made it. Happy is an immature womanizer stuck in a low-level job. Linda Emond, who plays Linda Loman, is distraught over her husband's decline. She's angry at her sons for not doing more to help him, for treating him poorly, and for not getting their own lives together.

Garfield seemed a bit delicate for someone who'd spent part of the past 15 years working on ranches out West. But he was very effective in the flashbacks as a teenager who believes that nothing will stand in the way of his success, then is brought down in a way that's crushing. I'm excited about seeing him as Peter Parker in the new Spider-Man movie this summer.

This revival uses the original set design, by Jo Mielziner, and music, by Alex North, two things I wouldn't have known if I hadn't read about them beforehand. I especially loved the set, with its wooden cutouts of trees, and the Lomans' neat and simple but worn home. Also, Brian MacDevitt's lighting design, which made leaves appear to be falling, was a terrific touch.

Death of a Salesman always shows up on the lists of the best American plays and I've been thinking about what makes this an "American" story. For me, it's Willy's unbridled optimism, the sense that we're defined by our jobs and the outsized role that sports plays in our society.

In one of the flashbacks Bernard, played by Fran Kranz, is a studious and awkward classmate of the Lomans. He worships Biff and helps him cheat on tests. Later, Bernard becomes everything Willy would have wanted his sons to be. And Miller even gives him a tennis racket. The tables have turned. Now he's the athlete.

It's like one final, ironic twist in a heartbreaking story.
Posted by Esther at 10:30 AM No comments: