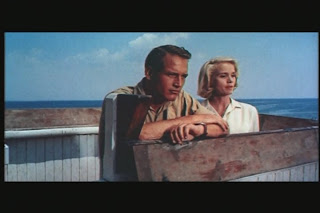 I've seen lots of Paul Newman movies over the years, but the one that sticks with me the most is 1960's Exodus, which is hokey and overlong and overwrought. But I must have watched it at least a half-dozen times in the months leading up to my first trip to Israel, in August 1995.

I can just picture Newman's Ari Ben-Canaan - tanned, confident and forceful - telling Eva Marie Saint's Kitty Fremont why the boatload of desperate Jewish refugees simply could not give themselves up to the British authorities. Even if, as my Israeli tour guide later told us, the portrait was "a little embarrassing, no one can be that good," it was still a pretty thrilling performance.

I'd read that Newman was seriously ill but the announcement of his death at age 83 still came as a shock. Of course, in addition to his acting, was also famous and beloved for his philanthropic works, most notably, for the Hole in the Wall camps for children fighting cancer and other diseases.

Dalia Lithwick, an editor at Slate.com, worked as a counselor at one of the camps for several years and she's written a very moving tribute to this extraordinary man who loved to visit with the kids and take them fishing. Here's part of what she says:

"Each summer of the four I spent at Newman's flagship Connecticut camp was a living lesson in how one man can change everything. Terrified parents would deliver their wan, weary kid at the start of the session with warnings and cautions and lists of things not to be attempted."

"They'd return 10 days later to find the same kid, tanned and bruisey, halfway up a tree or canon-balling into the deep end of the pool. Their wigs or prosthetic arms—props of years spent trying to fit in—were forgotten in the duffel under the bed. Shame, stigma, fear, worry, all vaporized by a few days of being ordinary."

"In an era in which nearly everyone feels entitled to celebrity and fortune, Newman was always suspicious of both. He used his fame to give away his fortune, and he did that from some unspoken Zen-like conviction that neither had ever really belonged to him in the first place."
Posted by Esther at 1:45 PM

He was awesome, wasn't he?

Now I have to put Exodus on my Netflix list...

Well, "Exodus" is kind of long and it didn't exactly get the greatest reviews when it came out. In fact, I think it was pretty much panned. But it does have great sentimental value for me.