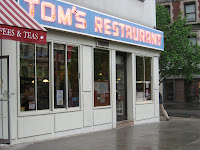 At the risk of sounding totally ignorant musically, I was surprised when a friend told me that there was a song about Tom's Restaurant. I only knew the Upper West Side diner, on the edge of Columbia University, as the exterior of the place where Jerry, George, Elaine and sometimes Kramer hung out in Seinfeld.

I'd never heard of the Suzanne Vega song "Tom's Diner." And I've still never heard the song. But I'm a big Seinfeld fan, so I made a pilgrimage to the diner in May, during a rainy morning in New York City. From the inside, it doesn't look anything like the tv show, but it was a thrill to see it anyway. (Yeah, I like seeing the places that have been used as locations for movies and tv shows.)

In today's New York Times, Vega has nice essay about how she came to write the song. Here's part of what she says:

"I got the idea for “Tom’s Diner” in 1981, but I wrote it in the spring of 1982, making the song 26 years old now. When I was at Barnard College in Manhattan, I used to go to Tom’s Restaurant for coffee, and after I graduated I also ate there before going to work. It was then a cheap, greasy place on 112th and Broadway, and it still is, in spite of its celebrity. ... I had been taking classes at Barnard with titles like 'The Dramatic Monologue.' I was in Tom’s and I thought it would be fun to write a song that was like a little film, where the main character sees all these things but can’t respond to any of it unless it relates to him directly."

I have to admit, the only other Suzanne Vega song I even remember is "Luka," and the subject matter, an abused child, always made it a very difficult song for me to to listen to. But now, I'm really curious to hear "Tom's Diner."
Posted by Esther at 3:20 PM

Make sure you get the dance mix instead of the original - it's ultra cool.

Wow, I know the song (and like it) but I never knew it was about the same restaurant in Seinfeld. Thanks for giving me the chance to learn something new!

FWIW, I always assumed -- mistakenly? -- that "Luka" was about spousal abuse, not child. But you could be right.

Thanks, Sarah! Maybe I'll get both.

Well, I've learned a lot from your blog, too. And yeah, I was surprised to learn there was a song about the "Seinfeld diner."

Hmmm, I thought it was about child abuse, but it's been awhile since I've heard it. Either way, I just remember it being a very difficult song to listen to.