Still turning the world on with her smile 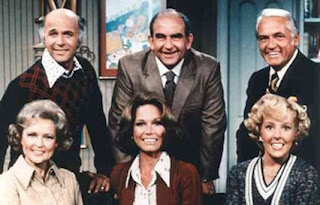 In honor of my upcoming trip to Minneapolis, now only a day away, The New York Times is reporting that the final three seasons of The Mary Tyler Moore Show are coming to dvd. I have the first season, and I just watched the opening credits.

Gosh, I loved that theme song:

Who can turn the world on with her smile?
Who can take a nothing day, and suddenly make it all seem worthwhile?
Well it's you girl, and you should know it
With each glance and every little movement you show it

How will you make it on your own?
This world is awfully big, girl this time you're all alone
But it's time you started living
It's time you let someone else do some giving

The view of the Minneapolis skyline as Mary drives into the Twin Cities - I just got a chill! It makes me want to twirl around and throw my hat into the air! (Note to self: pack a hat.)

The first four seasons of the show were released between 2002 and 2006, but since then, nothing. So, what took so long? In the article, Mark Harris explains that 20th Century Fox apparently felt the market for tv shows on dvd was glutted.

But persistent fans, including Oprah Winfrey, kept up the drumbeat. I had no idea Oprah was a fan. Harris notes that she got her start in local television, in Nashville, and has often spoken of Ms. Moore's portrayal of a woman in the workplace as inspirational. Harris says that "in its later years the show became television’s first great workplace sitcom.''

The Mary Tyler Moore Show aired on CBS from 1970 to 1977, the prime television-watching years of my youth. It was definitely one of my favorite shows growing up. It would probably be a stretch to say that Mary Richards was an inspiration to me, but I think Mary Tyler Moore is a great comic actress and I've loved her ever since the reruns of The Dick Van Dyke Show.

(I didn't realize that The Dick Van Dyke Show originally aired from 1961 to 1966. That means there was only a four-year span between the end of that show and the beginning of The Mary Tyler Moore Show. Wow, I thought there was a much bigger gap. They seem light years apart.)

I was very curious about this. There had been steady releases of the first four seasons and then nothing. Same with "The Bob Newhart Show," which I love to death. Hopefully the last two of that series will get released as well.

It never ceases to amaze me what junk from TV they put out on DVD, but I guess somewhere someone wants to own the second season of "Dog the Bounty Hunter."

While we're on 70s sitcoms, I hope these studios will also get out the rest of "All in the Family" and "Maude."

Nanci Griffith sometimes tours with Sonny Curtis, who wrote this theme song. Nanci used to sing it in her concerts and the whole audience would sing along. She says that if you're an American girl and you can't get back into the US then just find a female customs agent of a certain age and start singing this song to her and she'll let you in without question.

When you're in Minneapolis, I hope you'll go get your picture made by the statue of MTM while you're throwing your hat in the air!

I loved the Mary Tyler Moore show and all its spinoffs--Rhoda, Lou Grant and even Phyllis (Cloris is a contestant on Dancing with the Stars this Fall--I am so rooting for her!).

It's hard not to grin thinking back on the show, it was truly funny and memorable. One of the best casts ever.