A straight girl speaks out for equality 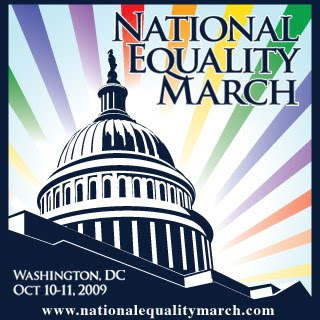 I wish I could be in Washington, D.C., tomorrow for the National Equality March, to show my support for the friends who have done so much to enrich my life.
The goal of the march is simple: equal protection for lesbian, gay, bisexual and transgender people in all matters governed by civil law in all 50 states.

And we are making progress. On Thursday, the House passed a bill that would broaden the definition of hate crimes to include attacks based on sexual orientation.

But there's more work to be done, including repealing "Don't Ask, Don't Tell", which would allow gay and lesbian members of the military who serve their country bravely to serve it openly.

We need to repeal the Defense of Marriage Act so that gay and lesbian couples can have the same benefits and protections as their straight counterparts. We need to advance marriage equality and protect it in places where it's under attack, most notably this fall in Maine.

I'm speaking out on my blog, as I've done in the past, because this is not gay issue, it's an American issue, an issue of fairness. No one in this country should be denied equal rights because of the way they were born - whether they're gay or lesbian or black or Hispanic or Asian or a woman.

I can't be silent because silence implies consent.

Simply put, I can't tell my friends who are gay and lesbian that they're second-class citizens, that they aren't entitled to the same rights and protections I have. We're talking about good people, hardworking, productive, taxpaying citizens, people with the best family values I know. They're people I love and admire and I want the world for them.

I know there's been a split among gay-rights advocates about the wisdom of focusing attention on the federal government instead of concentrating efforts in individual states but I don't think it's an either/or situation.

We need both efforts because no one should have to wait for their civil rights at any place or at any level - in the workplace, at school, in their community, state or nation.

Tonight, President Obama will address the Human Rights Campaign dinner. I'd like to remind him of what another African-American recipient of the Nobel Peace Prize, the Rev. Martin Luther King Jr., said in his Letter from the Birmingham Jail:

"For years now I have heard the word 'Wait!' It rings in the ear of every Negro with piercing familiarity. This 'Wait' has almost always meant "Never." We must come to see, with one of our distinguished jurists, that "justice too long delayed is justice denied."
Posted by Esther at 10:00 AM

I think DOMA is the big one on which it all hinges. That has to go, if we're to have any hope of having equal rights under the law. Want to defend marriage? Then outlaw divorce! I'm sure that would go over big with the hypocritical "family values" crowd.

(And, personally, I'd like for things to happen at both the state and national level.)

Yeah, I definitely agree, Kathy, there is so much hypocrisy. The people who talk about "defending" marriage never mention outlawing divorce because, of course, no one would ever go for it! And if they really wanted to "protect" the children, they'd work on issues like poverty, education, abuse. But it's so much easier to put all of your fears onto a minority group and scapegoat them, unfortunately.

Thanks, Monica. I think it is important to work at both levels simply because there are some issues that are national, like DADT and repealing DOMA, and some that are local, like employment and housing discrimination.