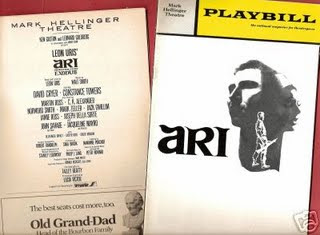 It's the greatest feeling when someone comes across an old blog post in which you've asked a question - and answers it!

Yesterday I received a nice although, sadly, anonymous comment on a blog post I wrote about a musical based on the Leon Uris novel Exodus, titled Ari. The show opened on Broadway in January 1971 and closed a couple weeks later. 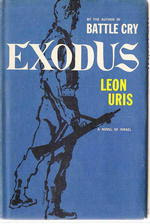 Uris adapted his 1958 bestseller for the stage and wrote the lyrics. I mentioned that I hadn't been able to find out anything about Walt Smith, who composed the music. Well, a reader filled me in.

"The man who composed the music for Ari, Walt Smith, is a jazz pianist currently living on the Western Slope of Colorado. He has received some national acclaim as a fine live jazz performer."

Smith and Uris were close friends and Ari was apparently the only musical theatre project he worked on. I did a little Googling and came up with an interview in which Smith briefly mentions the musical.

“In those days it was called ‘Ari’ — you didn’t call a musical by the same name as the novel.”

Today, everyone connected with the show wants to make sure you know their musical came from the novel or, more likely, the movie. So Ragtime the book is Ragtime the musical. They didn't change it to Coalhouse. (Good move!)

Sometimes the name change is an improvement: Oklahoma!, which opened on Broadway in 1943, was based on the play Green Grow the Lilacs.

My friend Kevin, the Theatre Aficionado at Large, told me about the short-lived 1966 Broadway musical A Time for Singing, based on the novel How Green Was My Valley. In my humble opinion, that name change was not an improvement.
Posted by Esther at 10:45 AM