Oy, they were Jewish enough! 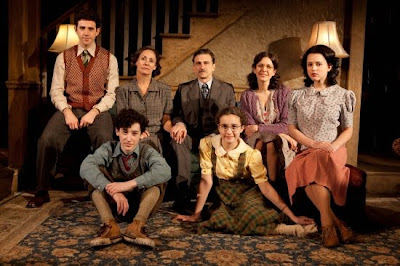 Before the Broadway revival of Neil Simon's play Brighton Beach Memoirs sadly closes tomorrow, there's something else I have to say. One aspect of the discussion about this terrific production disturbs me. It's shown up on the Broadway message boards and in at least one of the reviews.

Here's an example from All That Chat:

"I also happen to think David Cromer put together one of the most goyish casts I could imagine for a Jewish family. Accents were spotty, and I never felt these actors were a real family."

Critic John Simon mentioned the same thing in his review for Bloomberg News:

"What the evening sorely lacks is aromatic Jewish-American inflection and idiomatic gesticulation, somewhat deficient even in the original production, presumably from fear of being mistaken for patronizing caricature, instead of recognized as leavening authenticity."

Well, I find this argument offensive and bewildering. You don't think they were a real family? Fine. But don't base your opinion on a stereotype.

It's entirely possible to be Jewish without a thick Yiddish accent or wildly moving your arms around when you talk or having everyone yell at each other at the dinner table. Even in the 1930s, when Brighton Beach Memoirs takes place.

Trust me on this. I grew up with two Depression-era Jewish parents. And when I lived in Israel for a year, I learned that there's no "one way" to be Jewish.

What Cromer has done so effectively in directing the play is to strip away the excess - and I don't remember any exaggerated New England accents in his production of Our Town either. As Chris Jones says in his Chicago Tribune review, Cromer "rediscovers the actual, vulnerable Americans underneath."

As Kate Jerome, Laurie Metcalf isn't a stereotypical Jewish mother one generation removed from Eastern Europe - but that's the enormous strength of her performance.

When Eugene asks his mother why she doesn't buy a half-pound of butter instead of a quarter-pound at the store, she responds: "And suppose the house burned down this afternoon? Why do I need an extra quarter pound of butter?"

Yes, that's funny. But the way Metcalf says those lines it's not a joke. I understood that behind the quip was the very real insecurity of a Depression-era family struggling to make ends meet.

When Kate expresses her wariness of the Murphys across the street, I have to admit she reminded me a bit of my mother, who would always ask me before I brought a friend home from school whether they were Jewish. (A line of questioning that infuriated me!)

But when Kate tells her sister Blanche: "How many times have Stanely and Gene come home from school black and blue from the beatings they took from those Irish hooligans," I understood the real fear behind her wariness.

The same goes for Dennis Boutsikaris, who I think is terrific as family patriarch Jack Jerome.

Near the end of the play, he says about his son Stanley, "I want him to go to shul with me on Saturday. They stop going for three or four weeks, they forget their religion altogether." He acted and sounded authentically Jewish to me without stooping to caricature.

In fact, the original text, which doesn't contain any Yiddish at all, has Jack saying "temple," not "shul." Whoever made the change - Simon or Cromer - it's a brilliant touch that works perfectly. It's exactly the word Jack would have used and Boutsikaris nails it.

The issue of who should play which roles has come up a couple of times in the past few weeks regarding able-bodied actors taking on disabled characters.

The deaf community is upset that a hearing actor - Henry Stram - has been cast in the role of a deaf character in Carson McCullers' The Heart is A Lonely Hunter. And some advocates for the disabled expressed disappointment that a deaf/blind child wasn't picked over Abigail Breslin for the role of Helen Keller in the upcoming Broadway revival of The Miracle Worker.

To me, only criteria is whether or not an actor is believable in the role. The family onstage at Brighton Beach Memoirs seemed totally believable, regardless of the actual religious or ethnic background of the actors.

Despite the title of this blog post, there's not an oy or a vey in Brighton Beach Memoirs - and that's fine. A Jewish family - absolutely. But not one drowning in schmaltz. I'm just sad that more theatergoers won't have a chance to see them.
Posted by Esther at 11:45 AM

Bravo! What you've said is perfection.

Thank-you Steve. I just think David Cromer and the cast of this production have gotten a bad rap in that regard. Their performances resonated for a lot of theatergoers - Jews and non-Jews alike.

The criticism is so unfair and verges on a stereotype of how people think Jews "should" look and act.

And just to set the record straight, my father DID NOT ask whether you were Jewish before I brought you home! Although he did remark afterward how tall you were! ;-)

I totally agree! There is no one way of being Jewish or black or gay or anything else. Kudos to you, Esther, for speaking up on this point.

Thanks, Jan! That criticism really got to me, as you can tell!