In defense of applause 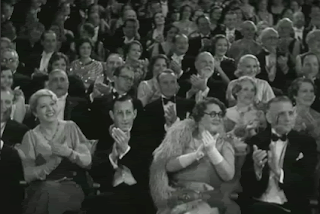 I've watched New York Times film critic A.O. "Tony" Scott on At the Movies and he seems like a pleasant fellow. But part of his essay comparing theatre and movies hit a nerve. (Thanks to Jonathan Mandell, who writes about New York theatre at The Faster Times, for the link.)

Here's what Scott had to say about the current Broadway revival of A Little Night Music and the Ingmar Bergman film on which it's based, Smiles of A Summer Night:

"You watch Bergman, whether at home or in a revival house, in a state of solitude, but you go see “A Little Night Music” in a crowd and partake of its rituals. Many of these strike me, after 10 years of moviegoing with little time for theater, as bizarre, from the apparently obligatory ovations — is there nothing New York audiences won’t stand for? — to the practice of applauding after every number."

He describes seeing A Little Music as "an encounter with celebrity" and the applause as "an act of communal congratulation for having done so."

Okay, maybe audiences are a little too quick to jump to their feet at the end of the show. In a perfect world, we'd only stand for the most incredible, memorable, take-your-breath-away performances and applaud for the most emotionally gripping songs.

But do the applause and the standing ovations really hurt anyone? Do they detract from anyone's theatergoing experience compared with, say, talking during the show or being seated late or unwrapping a piece of candy? I don't think so.

Scott has some good points - seeing a movie and going to the theatre are different experiences. But his allusion to theatre and its bizarre rituals strikes me as needlessly snooty and dismissive of an art form he admits he's barely made time for in the past decade.

Unlike movies, the people up on stage are right there in front of you. They're human beings, not larger-than-life images on celluloid. When they come out at the curtain call after having made you laugh or cry for the past 2 1/2 hours, it's natural to want to give them an ovation. It's kind of a catharsis.

Besides, I don't think people are applauding to congratulate themselves. They're doing it to acknowledge performances that they've enjoyed. (And since most of the tickets are bought by tourists for whom a Broadway show is a treat, I think part of it is the excitement of simply being in the audience.)

If people want to stand and applaud Catherine Zeta-Jones or Angela Lansbury as they take their bows at the conclusion of A Little Night Music, I don't think it's bizarre. Seeing an actor onstage whom you've loved from movies or TV is thrilling. (And is it so difficult to imagine that the audience may simply have enjoyed their performances?)

While I enjoy a good movie, it's too easy to do in solitude. Going to the theatre forces me to be part of a crowd. The fact that it's a communal experience is a good thing. Too much solitude is not a good thing.
Posted by Esther at 8:25 AM

The funny thing is that I often go to movies where people applaud at the end. That doesn't make sense to me, since the actors can't actually hear them. When I saw the movie of Dreamgirls, people even applauded after the musical numbers.

Great point, Esther. Nothing in theatre is more thrilling than the act of shared enjoyment. It can make an exciting performance even more exciting.

There's also the tourist factor of justifying to themselves the exorbitant amount they paid for a Broadway show. Stephen Sondheim pointed that out several years ago, and it's well-founded.

I agree that the audience should be allowed to react in any way they wish - and I've heard applause in the middle of straight plays, too, after a particular sharp or witty line. But I do resent over applause - which I blogged about. An assumption that there should be an applause after every song, even if it's not an applauding moment.

One of the best shows I saw this year - a new Australian musical "Once We Lived Here" - has a very down end of Act One. Very down. It felt hard to applaud after that, but eventually the audience decided to clap to show recognition, even though we were still in a bit of shock from what had happened.

As for standing ovations - I think Australian theatre audiences get this right; it doesn't happen at every show, but it happens enough that it isn't just an automatic reaction, but a genuine expression for a very well done show.

Hey, thanks for the comments!

Linda, Applause at the movies is strange. I'm sure I've heard it once or twice but not very often. I guess people swept up in the moment so they forget it's not a live performance! Also, I think applause is a natural reaction when you see something you like. And all it takes is one person to start the ball rolling.

Hey Todd, I agree. I usually end up at the movies at times when there aren't many people in the audience. But at the theatre, I'm always in the middle of a crowd. That shared enjoyment is what makes it so exciting. I've been at shows where there's been a collective gasp from the audience, and it's amazing.

Yeah, I see your (and Sondheim's) points, Mondschein. This may be counterintuitive but I think sometimes I'm easier on shows "because" I pay for all my tickets. I have a vested interest in enjoying myself, so I don't feel like I've wasted my money. OTOH, if the ticket was free, what do I care whether I liked it or not?

Thanks for the link, Crossoverman. Yeah, I know, applause after every song can be a bit much. (Maybe people think it's like a concert?)

I was at Gypsy before it transferred to Broadway from City Center and there was a standing ovation for Patti LuPone after "Everything's Coming Up Roses." It was absolutely thrilling because I'd never been a part of anything like that before.

Btw, when I saw The Lion King on Broadway, the actor playing Scar (the villain) got booed at the curtain call! (Lots of kids in the audience!) A backhanded compliment, I guess, for the good job he did!

I'd love to be in an audience for a mid-show standing ovation, because those ARE rare. I wish I'd gotten to see Patti in Gypsy!

Oh Crossoverman, I wish you could have been there with me! It was exhilarating. Not sure I'll ever see another one. It probably only happens once in a theatergoer's life. :-)

The thing is, when someone in front of you stands up during the curtain call, you have to do the same thing or you don't get to see the actors take their bows. So more and more people stand up so they can see. I think sometimes an audience-wide standing ovation is a result of a reverse-domino effect.

A couple of months ago we saw "Finian's Rainbow." I enjoyed it a lot, but I wasn't sure if I wanted to give it a standing O (which was kind of silly of me; if you don't stand for a great show, which this was, then when *do* you stand?). The woman in front of me stood up, and I stubbornly sat there and tried to peer around her at the actors. She had an empty seat next to her, so I tapped her and asked if she'd mind moving over while she stood. She didn't move.

As we were filing out of the theater she turned around and she said, "If it's a good show, you give a standing ovation. Did you enjoy the show?" I said yes, and she said, "So you stand!" This made me realize that sometimes I've refused to stand out of stubbornness, and since then I've tried to be more relaxed about it. No need for me to try to show my theater cred by refusing to give a standing ovation. Now I stand when other people stand and I don't worry about it.

Hey Jeff, thanks for the comment. That's something I've also thought about and I forgot to mention. Sometimes you're forced to stand if you want to see! Or in my case, gather up your things quickly so you can hit the restroom. ;-)

But yeah, I don't obsess about it. I'm easy to please and I enjoy almost everything. I'm there as a fan, not a professional critic. If the people up on stage have entertained me, I don't mind standing and clapping.

Funny, there have been a couple of instances when people "didn't" stand and I felt like they should. But sometimes I feel weird about being up there on my own!

I never want to be the one who starts the Standing O, but I did once and one of the actors thanked me for it after the show. It was in a small theatre (100-150 people) and the front row was level with the stage. I was front and centre. The show was so brilliant, I couldn't not stand. They deserved it. So I stood and started the Standing O. And soon 150 people were on their feet. I'm not sure how often they got it during their run, but at least they got it once. They deserved it.