Last year, when I went to New York City in early November, I saw The Radio City Christmas Spectacular. I loved the show, especially watching the Rockettes ride around Manhattan on a double decker bus singing "New York at Christmas."

So I figured, why should the Rockettes have all the fun?

For the first time, I went to New York in December to take in the city in all of its holiday festiveness: the Christmas tree at Rockefeller Center, the store windows all decorated, the outdoor holiday markets brimming with shoppers and eclectic gifts.

First thing I did as soon as it got dark was head over to Rockefeller Center. The tree, a Norway spruce, looks brilliant at night, illuminated by more than 5 miles of lights. I couldn't believe how big and bright it was - much more spectacular in person than on TV. And it'll be up until Jan. 7.

As I walked toward Fifth Avenue, I saw something that amazed me and made me smile - giant snowflakes lit by LEDs projected on the facade of Saks Fifth Avenue. The snowflake show, set to the song "Carol of the Bells," plays for two minutes in the evening every half hour. It was just so cool and whimsical and made me wish I'd learned to use the video function on my cell phone!

Evenings and weekends I'm at the theatre. (Which is where you are, too, right?) But on days when there's no matinee, I'm visiting museums and taking in the sights. And New York City is a terrific city for walking. (Although I also take the subway, bus and occasional taxi.)

My first full day in the city was devoted to window-gazing. It was a weekday and not too crowded. I started with Macy's at Herald Square, which has a cute Letters to Santa theme. And I went back to Fifth Avenue. 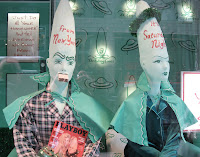 But my favorite windows were at Barneys on Madison Avenue near 61st Street. This year, Barneys is celebrating the 35th anniversary of Saturday Night Live with papier-mache figures of the show's best-known characters. I especially loved the Conehead display.

After that, I was hoping to pop into Serendipity for the famous frozen hot chocolate but the place is tiny and apparently you need to make a reservation a year in advance. (Okay, slight exaggeration.)

So I settled for a very tasty lunch of pasta and grilled salmon at the nearby California Pizza Kitchen, followed by a delicious chocolate-dipped banana from Dylan's Candy Bar.

And I did some browsing at holiday markets at Bryant Park, Columbus Circle and Grand Central Station. (There's also one at Union Square which I didn't get to.) 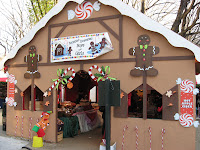 Columbus Circle, on the southern edge of Central Park, seemed to have mostly clothing - hats, gloves - as well as huge gingerbread cookies sold in an appropriate gingerbread house.

Grand Central is nice and the stalls seemed to have more of an international flair, but it's indoors so you feel a little squished. (There's a laser show in the ornate central terminal, too. It's entertaining but not as much as the Saks snowflakes.) 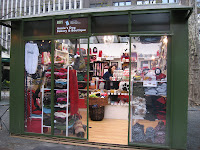 Bryant Park was my favorite of the three - lots of space to walk around, a good variety of shops, places to eat, and I had some nice hot apple cider. Plus, you can sit and watch the ice skaters or, if you're more coordinated than I am, try it yourself. It's also next door to the main branch of the New York Public Library, which has a terrific gift shop.

I know the weather can be iffy in New York at this time of year and hotel prices soar, especially on the weekends. But when the holidays are in full swing and hopefully it's not too cold, December really is a magical time to visit.
Posted by Esther at 1:30 PM

Your enthusiasm is infectious. The first time I went to NYC (aside from school trips as a kid) was about 5 years ago and it was at Christmas time. I loved it. But it is very crowded and after having been there now at other times of the year, I vowed never to do it again in December. Now you've got me rethinking that. I loved Rockefellar Center, Macy's and Bryant Park as well. And the NY Public Library is of course a favorite. I don't think I realized they have a gift shop, though. Adding that to my list of things to do next time in NYC - in April.

Thanks, Pam! The crowds weren't too bad. I did most of my walking around on Thursday and Friday. It may be worse on Saturday and Sunday. But yeah, I know what you mean. Still, I'm glad I did it once in December.

And yes, the NYPL gift shop is very nice. I bought a package of very witty New York-themed Christmas cards. Plus, I like supporting such a great institution.