Some final thoughts on Ragtime 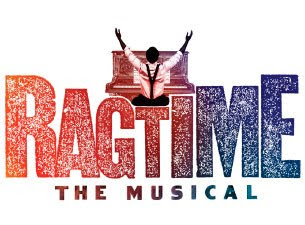 I really feel for the cast and fans of the musical Ragtime, which is closing on Sunday due to - what else - poor ticket sales. I know what it's like to have a beloved show end a Broadway run prematurely. (Update: Ragtime got a one-week reprieve, to Jan. 10.)

But I have to admit that despite a glorious score by Lynn Ahrens and Stephen Flaherty, this revival was a bit of a disappointment.

As someone who loved the 1977 novel by E.L. Doctorow, who enjoys epic American stories, I was really looking forward to the musical. But after a terrific opening number that introduces the WASP, African-American and Jewish immigrant characters, Ragtime never again soared as high for me.

Part of it may simply be my familiarity with the story - I knew the plot so well that there were no surprises. I had the same problem with a production of Parade I saw in Boston. I knew going in what happened to Leo Frank. So there was no "gasp" moment.

Also, while I enjoyed some of the performances in Ragtime - especially Christiane Noll as Mother and Bobby Steggert as Mother's Younger Brother - none of them truly got to me emotionally.

I chalked it up to seeing an early preview but now I'm not so sure. The characters who should have hit me the hardest - Robert Petkoff as the Jewish immigrant Tateh, Quentin Earl Darrington as the black piano player Coalhouse Walker Jr. and Stephanie Umoh as Sarah, the woman he loves and the mother of his child - didn't make a big impression. They never felt like fully developed characters.

I'm not even sure it was totally their fault. Although Terrence McNally won a Tony for his book, I don't think he was entirely successful. I liked the way he incorporated the real-life historical figures that populate Doctorow's novel but the individual stories left me feeling a little cold. They felt truncated and I was never truly absorbed in them.

And believe me, it didn't matter that there were no celebrities in the cast.

My biggest problem with Ragtime occurs (spoiler alert!) when Coalhouse Walker's prized Model T is destroyed by a group of bigots. It's an act of racism that consumes him and sets in motion the rest of the musical's tragic events.

(The "car" in this case is a red metal skeleton of a vehicle. Didn't Henry Ford say that you could have any color Model T you wanted, as long as it was black?)

The scene with the car was staged in a way that was so lame I almost laughed. And I never, ever, laugh at bigotry. The white vandals go through the motions of hitting the car without actually touching the vehicle. So even though Coalhouse is very upset, the car looks exactly the same after it's supposedly been destroyed. I couldn't see why he felt so enraged.

But most importantly, we live in a different world than when Ragtime was published in 1975 or when the musical premiered in 1996. Part of my reservation my simply stem from the fact that the events it portrays take on a different meaning in 2009.

Late in the musical, (spoiler alert!) Coalhouse begins a campaign of terror that culminates in his taking over a building and threatening to blow it up. Despite everything that's happened to him, in post 9/11 New York City, it's hard to muster any sympathy.

I'm always sad when a show closes, especially one as ambitious as Ragtime. I loved the music and I did enjoy it. There was some great imagery and I liked the panoramic view of early 20th century New York.

But I didn't leave the theatre wanting to tell everyone I knew that they simply had to see Ragtime. Maybe that was the problem.
Posted by Esther at 2:06 PM