Falling in love with my iPhone

I've had my iPhone for three whole days now and I'm still loving it. Having e-mail and Internet access wherever I go is so cool. Now, I'll be totally lost in cyberspace.

Sure, I liked my old Motorola Razr, so sleek and compact, until it became increasingly difficult to turn back on when I turned it off. Taking the battery out for a few seconds helped. Since it was three years old, I figured it had outlived its natural life and bought a new one.

But after three months, I had the same problem. On Sunday, I turned it off for a minute and when I tried to restart it, the phone came back on but the screen was blank.

Apparently I'm not alone. One suggested (and I'm sure unauthorized) fix I found online - banging the phone on a hard surface a few times - didn't help.

I decided it was time for a change. 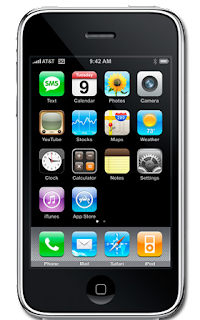 About 80 percent of my day - including when I'm at work or sleeping - I have access to a computer. Maybe 5 percent is spent driving. But it's that last 15 percent when I've thought, "It would be nice to have Internet access right now."

So far, it's been great.

If I'm stuck waiting in a doctor's office for two hours, as I was this week, or I'm running around doing errands, I can check my e-mail or catch up on the latest theatre news via Twitter. I can use it as a radio to listen to my favorite NPR station.

I'd tried out the keyboard a few times at my local Apple Store and it was awfully small and kind of difficult to type on. But now that I've used it a few times, it's much easier than I thought. I'm much more accurate than I thought I'd be.

I downloaded my first "app" from Apple's App Store, the Internet Movie Database.

I was hoping to find some Broadway or theatre-related ones but apparently my options are limited, according to this blog post from producer Ken Davenport. It would be nice if the Internet Broadway Database could be adapted for the iPhone. 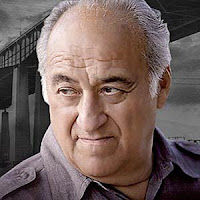 Having an iPhone with the movie database would have come in handy a couple years ago when I saw the musical Grey Gardens on Broadway.

At intermission, I turned around and realized the actor who played "Hesh" on The Sopranos was sitting behind me. At the risk of sounding terribly gauche, I introduced myself, told him how much I loved the series and confessed I didn't remember his name.

He was very nice - his name is Jerry Adler. Later, I realized that he was also in the movie Manhattan Murder Mystery, with Woody Allen and Diane Keaton. If only I'd known!
Posted by Esther at 9:30 AM

One of these days, I'm going to get an iPhone. My BlackBerry Tour does everything an iPhone can do, only worse.

I do find myself looking at the battery a lot, for fear it's going to run down and I won't be able to use the phone. Using the Internet does seem to require a lot of energy.

Whereas with my Razr, which was just a phone, I could go for days without checking the battery because I hardly ever received or made a phone call.

The newer 3Gs, which also costs $100 more, shows you the percentage of battery power you have left.

It's also a lot bigger to carry around than the Razr. Granted, it's in my shoulderbag but if I wanted to carry it in a pocket, it's a little too big.

On the plus side, it does everything it's supposed to do very well. I can surf the 'Net from anywhere and calls seem to come in clear. (The two or three I've had!)

I know a lot of people in New York City complain of dropped calls with AT&T but I've never had a problem and I've been with them for years. Maybe there aren't as many users in Providence.

And honestly, I'm probably just paranoid about the battery. I have a car charger so I'm never far away from being able to recharge it.

Plus, it's nice if I'm at the doctor's or someplace where I have to wait around for awhile or if I'm out doing errands for awhile and want to check my e-mail.

It's not an aboslute necessity for me but it's fun to have.