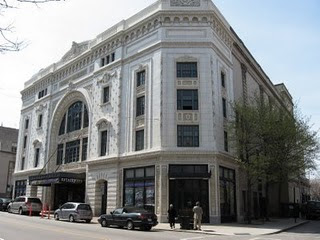 Providence's Trinity Repertory Company has announced the lineup for its 47th season. Here's the 2010-2011 schedule along with the description from the news release:

King Arthur has everything – peace, prosperity and a happy marriage… but will the arrival of the handsome, brash Sir Lancelot change Camelot forever?

It’s a dark and stormy night – perfect for a festive holiday party! This hilarious comedy romp follows three married couples through three disastrous Christmas parties, as they drink, frolic, and fight their way to… holiday cheer?

This unique stage adaptation is performed as a radio play, broadcast on Christmas Eve, 1946. Everyman George Bailey gets the chance to see what the world would be like if he’d never been born.

Fear stalks the people of Salem, Massachusetts. Is it the work of the devil? Or has hysteria, malice, and one young woman’s lust started a chain of events that will undo a whole community? (This is the centerpiece of the Project Discovery program that brings students to the theatre and actors into classrooms.)

Growing up in a small South Carolina town, Eugene and Alma find friendship, solace, and even love in each other. But he is light-skinned, and she is dark. Can their love survive the weight of the world?

On her wedding day, Shelby is a vision in pink – two lovely shades! Her mother and friends gather at Truvy’s Beauty Salon to prepare for the big day. Still, beauty, hairspray, and all the pink in the world can’t protect this young woman from what lies ahead.

Edgar Allan Poe has been missing for seven days. And that’s just the beginning of a journey that leads him to the bizarre, the macabre, and the sublime. Where is Poe going? To hell, to heaven… and back. (Thorne is a member of the acting company and this is his first play.)

So, what excites me the most?

Well Camelot, definitely, since I love the movie and I've never seen the musical onstage. Trinity Rep's artistic director Curt Columbus says, "We will be stripping away all of the expected trappings of traditional knights and fair maidens to focus on the complicated love triangle set in a world of political intrigue.''

I'm looking forward to British playwright Alan Ayckbourn's farce Absurd Person Singular. He's become a favorite of mine since I saw The Norman Conquests on Broadway last summer. The three plays were hilarious and together, they were one of my favorite theatergoing experiences.

I'm intrigued by the idea of presenting It's A Wonderful Life as a 1940s radio play. As someone who's not really into the annual production of A Christmas Carol, it's nice to have an alternative.

And the subject of Dael Orlandersmith's Yellowman, a 2002 Pulitzer Prize finalist, sounds interesting. In the New York Times, Ben Brantley called the play "a hard and piercing drama about intraracial prejudice."
Posted by Esther at 11:30 AM

I know Manitoba Theatre Centre did It's A Wonderful Life and Steel Magnolias this current season. (Or I think they haven't done SM quite yet, but still). I'm not there, so of course I've not seen them, but I can't help but find it an interesting parallel.

I was so excited when I received Trinity's lineup in my email a few days ago. I'm looking forward to ALL of the shows. I will definitely be renewing my subscription next season. Maybe I'll see you there.

Wow Dorian, that is really interesting. Maybe there's some connection between the two?

Hey Pam, I'm glad you're excited! It does sound like a pretty good season. I'm just more excited about some plays than others. For example, I wish they'd picked another Arthur Miller work. But I understand that The Crucible is a good one for students. And it would be fun to see you at a show!