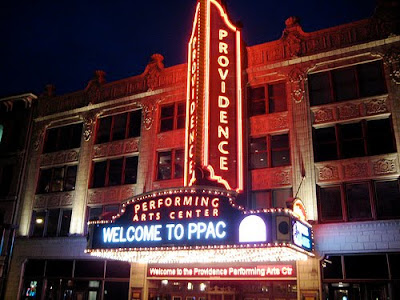 The Providence Performing Arts Center has announced its 2010-2011 season and I think it's a pretty strong one. It's also a milestone for me - I've seen every show. Here's the lineup:
Radio City Christmas Spectacular, Nov. 12-28
South Pacific, Dec. 7-12
Mamma Mia!, Dec. 28-Jan. 2
In the Heights, Jan. 11-16, 2011
The Lion King, Feb. 1-20, 2011
Blue Man Group, March 4-6, 2011
Next to Normal, March 22-27, 2011
Monty Python's Spamalot, April 15-17, 2011
West Side Story, April 25-May 1, 2011
Things kick off - literally - in November with the Rockettes in the Radio City Christmas Spectacular, which I saw in New York in 2008. It's a great show with some truly spectacular segments featuring those high-stepping dancers. And it'll definitely get you in the Christmas spirit. Here's my review.
Also on the PPAC schedule for next season are five musicals I really enjoyed on Broadway - South Pacific, In the Heights, The Lion King, Next to Normal and West Side Story. I can't say what the touring productions will be like but they're shows I'd see.
Honestly, I'm less enthused about Spamalot, Mamma Mia! and Blue Man Group.
The first two have stopped in Providence fairly recently. Mamma Mia! is a fun musical and I had a good time seeing it on Broadway. I was less enthused about Spamalot when I took in the tour at PPAC in 2008. And I saw Blue Man Group in Boston years ago. Different, but once was enough for me!
Of course South Pacific, West Side Story and The Lion King are classics that probably don't need an introduction from me. But theatergoers in Southern New England might not be as familiar with In the Heights and Next to Normal.
In the Heights, the 2008 Tony winner for Best Musical, refers to Washington Heights, a neighborhood at the northern end of Manhattan that's a Latino melting pot.
It's a sweet and heartfelt look at an immigrant community's hopes and dreams. I loved the choreography and the score that combines hip-hop and salsa with more traditional Broadway sounds.
Next to Normal is something so rare on Broadway, an original musical about a complex subject - a woman suffering from mental illness and the effect it has on her family.
People are divided on it but I gained a greater understanding of the devastating impact of mental illness and how difficult it is to treat. Plus, the vibrant rock 'n' roll score conveys so well what each character is going through. Tough to watch at times, yes, but utterly compelling.
Posted by Esther at 9:40 AM

Ooo, thanks for the heads up Esther. I've been waiting for PPAC to announce its season. (Heck I'm a subscriber and I haven't received anything yet). Anyway, I've been debating whether to subscribe again or just buy tickets to the shows I really want to see. I was really disappointed in this season, and feel that I would have done better just buying tickets to shows I'm interested in. The downside is I might miss a show that I'd actually LOVE and just don't realize it. Decsions, decisions....

I'd love to see Lion King and West Side Story (neither of which I've seen). Not sure about In the Heights and Next to Normal. I have no interest in the Rockettes (I saw them in NY and once was enough). South Pacific, I could take it or leave it. What to do, what to do...

I'm on the mailing list and I haven't gotten anything either. The "official" kickoff is Tuesday and I'm sure they're waiting until then to send out fliers.

Subscribing doesn't really work for me because my schedule is always kind of up in the air! And since I go alone, I can almost always find a single seat that's pretty close. Although I've already bought my ticket for A Bronx Tale. I'm looking forward to that one.

I'll be seeing A Bronx Tale as well. I traded my 101 Dalmatians tickets to see it. I'm looking forward to it.

Yeah, I think A Bronx Tale will be good. I know someone who saw it on Broadway and really enjoyed it.