Why should I wait until opening night? 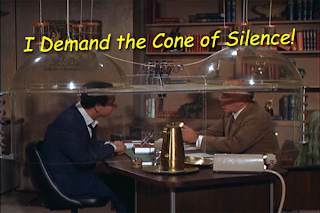 Wow, some people just don't get it, do they?
British theatre producer Michael Codron, who received an Olivier Award for lifetime achievement earlier this month, has some harsh words for theatre bloggers.
Here's what the 79-year-old Codron told Mark Lawson in The Guardian:
His single flash of anger is aimed at the bloggers who, in defiance of theatrical convention that comment is embargoed until press night, review a play during its previews. "It's almost invariably reactionary responses. They're the modern equivalent of the lot that used to boo the plays in the 50s and 60s. I think they're ghastly."
When I started my blog, if I saw a preview I wouldn't wait, I'd post my review immediately. Now, I do tend to wait for opening night simply because it's more fun that way! If I saw a preview performance, I always mention that.
But since I pay for my tickets I'm under no obligation to anyone, especially the producers, to hold off on stating my opinion. And, I might add, I've paid full price for shows in preview.
The blog isn't my job, it's a hobby. It's simply an extension of a conversation I might have in everyday life. It's a way for me to jot down my thoughts, to vent occasionally, to write about something I enjoy.
To say that I shouldn't post a review until opening night is as silly as saying I shouldn't talk about the show with friends or coworkers or post something on Twitter. I should just enter the cone of silence and not utter a word to anyone.
Theatre fans are a pretty passionate bunch - hate it or love it, we want to talk about what we've seen. Why would you want to stifle that dialogue? Besides, the bloggers whose reviews I read regularly are extremely thoughtful and knowledgeable - hardly "reactionary."
Of course if someone accepts a free ticket from a producer with the understanding that they'll wait until opening night, well that's a different story. It's just not mine.
Posted by Esther at 12:15 AM

Exactly! A Blog is a Web Log. It's not a newspaper and unless you got a free ticket/invite, a blog is a personal journal for the public to read and if you paid for it, why couldn't you comment on it?

I guess he wouldn't want us to talk about a great show we saw either? Because it was in previews?

Esther, my love, you hit the nail right on the head. The moldy Old Guard simply don't understand the new media. They rail against change, and in the process they fail to take advantage of potential marketing opportunities.

Here's an irony: Codron actually misuses the word "reactionary," under the false supposition that it means "in reaction to." In fact, it means "wanting to return to the days of yore." And that is, in fact, what Codron himself wants to do. Tu quoque, Mr. Codron.

When I get press tickets, I abide by embargoes. It's only fair. But when I pay for my ticket, I'll say what I want, where I want, when I want. And no reactionary septuagenarian is going to stop me.

It also seems a bit self-defeating to say, "We want you to come to the theater. But don't you DARE talk about it!" Half the fun of going to the theater is being able to talk about it, and if blogs have made it more possible to extend that conversation, that should be seen as a good thing, not a bad thing.

This speaks to another issue -- the loss of the preview (and try-out) period as a fix-it session with the happy collaboration of the preview audience. That ended when they started charging the same for "preview" performances as for "regular" ones, and when they usually obfuscate the distinction in their marketing.

i'll echo the concurring thoughts. you hit the nail on the head. the internet is providing a conversation with the means to engage people in the discussion in a larger way. like you, since i buy all of my tickets myself, i don't have any obligation to the show. unlike "official" reviewers for named businesses deemed lucky enough or name enough be part of that contingent.

and on that front, i'm sorry, but aren't all reviewers seeing previews? i tend to aim for the tail end of the preview period anyway when purchasing tickets. and i've seen ben brantley, michael musto, and elizabeth vincentelli in attendence, likely as comps, when i'm there as a paying consumer. so the whole concept of a preview, like NYTheater said, isn't what it used to be.

its a shame really that he doesn't get it, much like a lot of producers here. simply out of touch with the way people consume information, which doesn't bode well for them as players in media.

ShoNuff, on Broadway, critics are seeing previews, but they're seeing the tail-end of those previews: there are three to four weeks of shows before they head out to officially pave the way for the opening. If Ben Brantley bought a ticket for the first preview, he could then review the show, so publicists go out of their way to offer free tickets (and buy advertising) to keep critics coming late in previews and to control the buzz of the show.

In all honesty, though, if a show hasn't transferred to Broadway, or if it's got a new cast, or if it's something entirely new, the first couple of weeks are going to be rough. Bloggers should feel free to write about the show (and people like Codron should realize that they can't stop us). HOWEVER, they should also be fair to their readers and acknowledge that despite current imperfections, the play may improve. We should always hope for the best, especially as people who support the theater.

As an earlier commenter points out, previews are marketed the same way as regular performances, and they don't cost any less. So if you're a tourist buying a TKTS ticket, you'll have no way of knowing you're seeing a preview.

Furthermore, don't the producers want people to blog about previews, so they can get a sense of audience reaction? Bloggers might not be typical audience members, but their voices do represent a substantial segment of it.

That said, when I blog about a bad preview I've seen, I try to point out that I saw a preview. It's only fair.

And once again, yet another reason shows need to go back to going out of town. Ask the producers of Wicked if they would still be running.

I really appreciate this post and the comments it has elicited!

I recently reviewed a show on my blog--a show I saw on the 5th night of 5 nights of previews, the night before its official opening--a show to which I purchased not just 1, but 2 tickets--and I received a rather curt comment in response. I was very forthcoming in my review about the fact that I saw it in previews. Had I had nothing but positive things to say about this show, I doubt I would have received this comment.

As you and others aptly notes, conventions and conditions for previews and theatre criticism alike have changed (dare I say evolved); this requires adjustment, and everyone's not there yet.

Thanks for the insightful comments, everyone! It's been a difficult day - finally got the basement pumped out. So the blog love is much appreciated.

I hope Mr. Codron is an aberration and most producers do understand that you can't stop the paying public from talking about a show, no matter where the discussion occurs.

The blogoverse has been a great opportunity for me. I don't have any friends nearby or coworkers who are interested in the theatre. I'm having conversations about theatre that I never would have had if it weren't for blogs and social media bringing us together. I think we're a force for good!

And most tickets to Broadway shows are sold to tourists who probably don't even know whether or not a show is in previews. Since they're on vacation and can't come back another time, they have no choice if they really want to see a particular show.

But as many of you noted, if I do see a show in previews, I always mention that in my review and I give it the benefit of the doubt.

You state so eloquently my EXACT feelings as a fellow blogger in regards to this issue. I, like you, like to wait and post my "review" the day after opening, too, but I feel absolutely no obligation to hold off. I, too, feel obligated to state that I saw a preview, especially if it is before the "freeze point" a few days before the show opens, because so much can change.

I would like to think that people going to a preview go with the understanding that things may still be in flux. But I also think that if a producer wants to avoid early "reviews" by bloggers, etc., then they should all offer substantially discounted tickets because the show isn't "finished" and/or make sure the show is close to ready at the first preview. Having worked on many a show myself, I know that at least part of what you are trying to learn from previews is how an audience will react. Do these people think that early audiences don't talk? What about those who walk out? At least with bloggers - most of whom actually care about and are excited by theatre - we've seen lots of stuff and can offer very valid opinions that can help shape a show. (I'm not talking about the bitchy-poos who thrive on nasty barbs, gossip and complaining because there is no student rush policy in place.)

I can only assume he isn't talking about bloggers who rave about shows in advance. He is a producer, after all, so he'll want his cake and eat it too...

Hey JK, thanks for the comment and the kind words.

You know, I got a great orchestra ticket for $55 for Finian's Rainbow in previews and I'm sure I gave the show a bigger benefit of the doubt than if I'd paid $120 in previews, like I did for Shrek!

You raise a good, point, that previews are a chance for the creative team to find out what's working and what isn't and bloggers can play a role in that.

But I think producers on Broadway also have to keep in mind that statistically speaking, 60 percent of ticket-buyers are tourists, who will see "one" Broadway show, and spend more money than they'd like for the privilege. And they'll go home and tell all their friends and coworkers about it, for good or ill. They may not know or care that the show was in previews. It's the sad reality and it puts even more pressure on actors, etc.